4-19 from: - http://www.baseballrumormill.com/2010/04/mlb-draft-notes-saturday-review-417/#more  - He has not received much attention to date, but Auburn second baseman Brian Fletcher hit his 11th and 12th home runs of the season with the second one coming against possible 2011 top pick, Vanderbilt's Jack Armstrong.

4-19 from: http://thecollegebaseballblog.com/2010/04/19/acc-weekly-baseball-honors-2  - Miami’s David Gutierrez and NC State’s Jake Buchanan share the ACC Pitcher of the Week honor. The Wolfpack’s Buchanan threw 99 pitches in a complete-game victory over Maryland. The Dallas, N.C., junior retired the first 10 batters he faced, and 14 of the last 16. Maryland scored single runs in the fourth and fifth innings as NC State went on to a 4-2 victory. Buchanan went to a two-ball count on just seven batters. He did not go to a three-ball count the entire game. This was Buchanan’s second complete game in as many starts at the Terps’ Shipley Field. He made his first-ever college start there on May 10, 2008, and tossed a five-hitter on 97 pitches and won 12-1.

4-17 from: - http://www.minorleagueball.com/2010/4/17/1426860/interesting-high-school-pitchers-a  - Dylan Covey, RHP, Maranatha HS (California) - Good athlete, not huge at 6-2, 195, but has more than enough arm strength with a 91-94 MPH fastball and a nasty curve. Well-known to scouts on the amateur circuit, like Cole he is relatively polished for his age and has done well against good quality competition. A University of San Diego signee, he's been rated a Top 20 talent for some time, has done nothing to change that this spring, and could get into the Top 10 under the right circumstances. I doubt he would get past the Angels at 18 and could go as high as the Mets at 7. 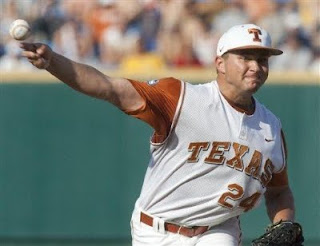 4-19 from: - link  - Barrett Barnes (Texas Tech) has been named the Phillips 66 Big 12 Baseball Player of the Week. -Barrett Barnes, Texas Tech, 1B, Fr., 5-11, 195, Sugarland, Texas/Fort Bend Austin - Barnes led the Red Raiders to a 3-1 week with a road win at Dallas Baptist and a series victory at home against No. 11 Oklahoma. He hit .529 (9-for-17) in four contests, along with two home runs and five RBI. The Sugarland, Texas-native connected on two home runs versus the Sooners to increase his team-leading total to nine. Barnes drew three walks during the week and posted an on-base percentage of .600. 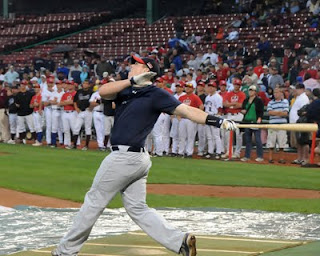 4-20 from: - http://baseballdraftreport.com/  - I’m very impressed with the improvements that Connor Powers has made to his game between his junior and senior seasons – he came into the year as a hacker who was limited to first base defensively, but will graduate as a more disciplined bat and an above-average glove at first.
Posted by Mack Ade at 10:30 PM