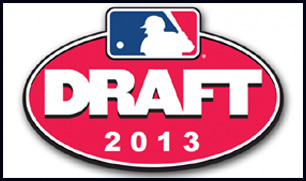 
1) Houston Astros: Jonathan Gray, RHP, University of Oklahoma: There are five players I considered here but the player that Houston will take will be Gray unless they have someone who will sign for considerably less and have a target in a lower round. Gray is the highest impact arm in this draft and could help the big league team quickly.


2) Chicago Cubs: Mark Appel, RHP, Stanford University: The Cubs want impact talent and there are two college players here with impact. Appel and Bryant. Bryant may be a 1B and the Cubs have one of those for the long term after locking up Anthony Rizzo, so Appel is the obvious choice.
3) Colorado Rockies: Kris Bryant, 3B, University of San Diego: Colorado has always played as a hitter park. They have struggled to develop pitching from both the college and high school ranks. They would be much better off taking the guy who can hit the ball out of any park to any part of it.
4) Minnesota Twins: Braden Shipley, RHP, University of Nevada: The obvious choice here is Kohl Stewart. Big potential, elite arm, but when you just demoted your recently acquired opening day starter and people could start losing their jobs due to 90+ loss seasons in consecutive years, you opt for the quicker impact. Shipley is no slouch with his upper 90's velocity.
5) Cleveland Indians: Colin Moran, 3B, University of North Carolina: Moran is the most polished college bat in the draft. There are questions if he can play 3B or if he'll end up at 1B. He would be a solid defender there and the Indians like safe bets at the top of their draft and Moran is that.
6) Miami Marlins: D.J. Peterson, 3B, University of New Mexico: The Marlins want a college player here and with the crazy run on them here, it's between Peterson, Stanek and Renfroe. I would think they take Peterson as he has a long track record of success.

7) Boston Red Sox: Kohl Stewart, RHP, Texas HS: It's over. The wait for a high school pick has ended with the best pitcher in the class. They may be getting the highest ceiling arm in the draft after not having a pick this high in a long time.
8) Kansas City Royals: Hunter Renfroe, OF, Mississippi State University: After trading Wil Myers in the offseason, the Royals have an opening for a power bat in the OF. Bubba Starling needs time and they need impact in the next couple years. Renfroe could do that for them.
9) Pittsburgh Pirates: Ryne Stanek, RHP, University of Arkansas: Missing out on Appel last year, the Pirates could take an arm that could have been in the top 3 picks had he had a good spring. Nothing is wrong with him physically, he's just been erratic and typically does better when it gets warmer. He would be a great pick at #9.
10) Toronto Blue Jays: Austin Meadows, OF, Georgia HS: Meadows isn't that much different than a player they have currently in Colby Rasmus. I think Meadows has more power potential and hopefully better plate discipline but with Gose beside him the pressure won't be on to stay if CF at the big league level.
11) New York Mets: Clint Frazier, OF, Georgia HS: I would think that the Mets would be ecstatic to take Frazier at #11. He has top of the draft power and should move more quickly than most prep players.
The rest of the list...  http://www.minorleagueball.com/2013/5/25/4363264/2013-mlb-mock-draft-version-2-0
Posted by Mack Ade at 5:30 PM

Mack, I know you're hoping for a college bat, but even you would be ecstatic about this if we drafted Frazier.