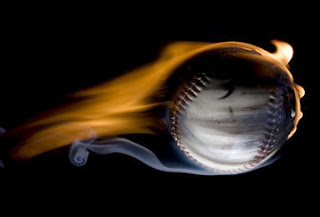 
Bartolo Colon's game plan is simple. Everything is predicated off well-located fastballs. Despite his advanced age, and diminished velocity, he is one of the heaviest (no pun intended) users of fastballs in the league. Since 2011, he has thrown the most heaters of any starter (minimum 450 innings). In fact, it is not even close. Colon has thrown nearly 86 percent fastballs over the last three seasons with Gio Gonzalez in second at just under 70 percent.


While Colon may seem like a one-trick pony, he actually uses the fastball as multiple different pitches. Take for example his work against Adrian Beltre in 2013. As division rivals, the duo locked horns 13 times. The results are irrelevant (.077/.077/.154 for those that care) but the process is evident. Of the 43 pitches Colon threw to Beltre, 34 were fastballs. The velocity range was 86 mph on the low end and 94 mph on the high end of the spectrum. The most impressive part was the varied location. Colon threw up and in on the hands as frequently as he threw down and away. The constant changing of speeds and shifting of eye levels makes illustrates how one pitch can look like a complete arsenal the opposing batter. http://espn.go.com/blog/sweetspot/post/_/id/42942/mets-should-enjoy-their-one-trick-pony


PED use or not, Stem Cell technology, and who knows what else has aided Bartolo Colon’s body over the last 3 seasons of success. Yes he was 18 – 6, with a 2.65 ERA – finishing 6th in AL Voting, however the A’s went and paid someone else to fill his spot (Scott Kazmir), and usually they are not wrong on guys. The 40 Year Old from Dominican Republic, is also a gigantic man who decimated his hamstring during a routine PFP  in 2011 with the Yankees. You have to think his lucky streak is numbered sooner or later.  Whether it is another failed drug test, or he blows out a ligament running anything down, or just has father time come down on him, signing this man to a 2 YR deal, for a team not probably contending in 2014, is downright absurd. http://mlbreports.com/2013/12/12/colonnym/


Boy, I hope this guy is wrong…


Look, you simply don’t know what you have when you sign these ‘old guys’.


I was in camp when the Mets invited Freddie Garcia to camp and try out for a rotation spot. He started the ‘Mets vs. Mets’ charity game the team always has the day before opening day of spring training. He was absolutely horrible. I was sitting behind home plate and I remember sharing a stare with John Heyman. We both looked at each other with a ‘WTF’ stare as Garcia tossed up one 78-mph fastball after another.


I don’t quite remember, but I don’t think he lasted with the team past that night, but, as you know, a few years later, he resurfaced as a great pitcher for the Yankees.


Was this a ‘natural’ progress? Who the hell knows these days. Frankly, I’d test everybody over 35 weekly for the rest of their career.


The Miami Marlins are still looking for a third baseman.


Mack – Okay, I don’t think the Mets would trade Daniel Murphy to a team they are trying to stay ahead of in their own division, but they probably would go prospect for prospect with Wilmer Flores.


That being said, who’s in their system Sandy might be able to pluck away:


OF Jake Marisnick - Miami’s current outfield is Giancarlo Stanton (no way, Jose), Christian Yelich (.288), and Marcell Ozuna. This leaves their number one prospect, Marisnick, without a job. A broken hand slowed down his progress last year (.183) but he still projects as a power bat in the Bigs.


LHSP Andrew Heaney - The Miami rotation looks like Jose Fernandez, Nathan Eovaldi, Henderson Alvarez, Jacob Turner, and Tom Koehler. Heaney is ready (A+/AA: 9-3, 1.60, 1.07) to pitch AAA in 2014 which could fit perfectly into the Mets future need for a young lefty. If Miami balks at moving this lefty, they could always turn to another one…

Hey Mack. The year was 2009 with Freddy Garcia, and I remember the situation well. He did pitch again in spring training that year, not well enough to make the team. So Omar sent him to Buffalo. And just as he had earlier the same April with Darren O'day, Omar lost patience with Garcia and released him after 2 starts in Buffalo. Garcia was not unemployed long. The White Sox picked him up and babied him, sent him to Appy League Bristol for a couple of starts, then to Sally League Kannapolis for 1 start, promoted him to AAA Charlotte for 1 start, and then brought him up. He went 3-4 for the White Sox in 9 starts that year. (56.0 IP, 4.34 ERA,1.214 WHIP, 5.9 K/9, 1.9 BB/9) The following year he was 12-6, making 28 starts for the White Sox, before signing with the Yankees the following year. I remember feeling cheated when they cut Garcia without giving him the opportunity to get back into pitching shape, just as I had felt cheated when they cut O'Day. The reason I remember it so well is bacause I loved both the selection of O'Day in the Rule 5, and the signng of Garcia that year, and I have linked them together in my mind.

Regarding a trade with Miami, I really don't see an intra-divisional trade going down. But if it did, I can't imagine the Marlins giving up Marisnick for Murphy. We might get an Andrew Heaney or Brad Hand, though.