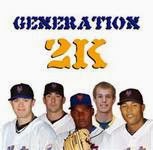 I highlighted in red where the numbers stand out:

WAR -  determines the player's total contributions to their team, be it baserunning, batting, fielding, and/or pitching

xFIP - Expected Fielding Independent Pitching - calculates the same way as FIP, but replaces the number of home runs with the amount they should have allowed

There's 21 names on this list. That's amazing. And frankly, other than Matt Harvey, some of the more impressive numbers are from kids like Gabriel Ynoa.

My guess is that at least 10 of these guys will be dealt off for key every day players to help fill out the team. Don't be surprised if the Mets don't continue to concentrate their drafting efforts on the mound.

I did include one pitcher that hasn't produced positive stats let (Andrew Church), but last year's second round pick does project as a mid-rotation starter and, in the opinions of draft experts, was a solid pick by the Mets.

Watch out for Ynoa and Fulmer...gonna be keys the the Mets' depth in 2015.

Thanks Mack for highlighting our pitching depth. This is why I am optimistic about the future of this team. What is impressive about this list is not the sheer number of names on the list, but the quality of upper level guys and the projectability of youngsters like Fulmer and Ynoa. Another name to watch is Casey Meisner, last year’s 3rd rounder. Akeel Morris is also worth keeping an eye on. Plus there are names like Familia, Black, and Leatherisch who could all be mainstays in the Mets bullpen for years.

This begs the question of how the Mets can maximize their returns from their pitching depth. Would you package some of the big names like Montero or Syndergaard for MLB bats now? Or would you trade guys like Gee, Mejia, and Niese as the youngsters develop? I prefer the latter. It is the Tampa Bay model. But unlike the Rays, the Mets should have the financial flexibility to hold onto the guys they really want to keep. I like this model because, barring injuries, I think it has the potential to produce the best rotation for the Mets. And more importantly, to continue to replenish the farm system with quality prospects so that the success can be sustained. We can all hope a rotation like the one below will develop for next few years:

Two guys I like to see in Mets uniform in return? Gregory Polanco from Pirates and David Dahl from Rockies. Addresses our need for a good lead-off batter and a power LH bat. This is where my dream (emphasis on dream) line-up begins…

The proper time to deal off a pitching prospect is after they have dominated either at the AA or AAA level.

We're not going to have much domination in Las Vegas. Montero's numbers are the exception in that lack of air.

That being said, you can only tag so many people as 'untradeable" (Syndergaard). You have to trade some of your upper MLB/AAA/AA prospects if you want to fill out the team with the proper every day players.

For me, the only pitchers in 2014 that would NOT be available in a trade are Harvey, Wheeler, and Syndergaard.

As for the rest, there are plenty within the system to take their place.

I think the smart move is to trade one of the veteran starters, a proven commodity.

After this upcoming season, the Mets could possibly have three proven starters to trade and all would probably get the Mets a good return.

Nurse, Gee, and Colon would be great bait; especially Niese or Gee. Both legit number 2/3 starters under controll for a few years at a reasonable price.

In today's market with the Mets laughable payroll, they must adopt the Rays, proven method of keeping payroll down, while replenishing the system with upper level talent.

Start of 2015, you have Harvey, Wheeler, Thor, Montero and then you pick who you want at the end. Gee would be my choice unless Mejia proves he can stay healthy. If he can, he's my number 5 starter and I'm trading Niese and Colon for a boatload of top prospects. Gee I keep as great insurance.

Now my rotation is killer, I have a number 3 starter as insurance, and a great replenished system that includes the prospects I just obtained, and pitchers like Gilmer, Gnoa, and Matz.

I'm also drafting the best pitcher available with my first rounder in order to keep this system going. Let's face it, we need this fresh blood every year. The Wilpons will NEVER PAY A MATT HARVEY 250 million 10 year contract in 5 years. No way!

This would be very easy 'yes' if Omar was still in charge.

I think Sandy will bring him to the States just to get him under the wing of the Florida-based roving coaches. This means he would pitch for the GCL Mets.

It was so hard to believe that a 16 year old gave up only 2 earned runs in 52 innings in the DSL.

I have him as part of a possible GCL rotation of him, Luis Silva, Jose Celas, Darwin Ramos, and Scarlyn Reyes... and that' before they even draft anyone!

Happy New Years Eve to you, and a very happy, healthy and rewarding New Year to you and your family.

I like your GCL rotation. Is Silva a recent IFA signee? I can't seem to find him anywhere.

Do you see Eucebio Arias repeating in the DSL this year? Seems to me if he is healthy he might be a candidate to move up. He is an extreme ground ball pitcher.

A kid I am watching this year is Carlos Gomez, and not just for the name. He came back strong with K-Port in 2013 after a 2012 lost to injury, giving up only 2 runs (none earned) in 23 innings. Do you think he might make it to Savannah, or is Brooklyn his likely destination?

Silva is a bonus baby.

Arias is another one. Sandy and Company are very quietly doing a very good job with International pitcher and shortstops.

Gomez is interesting... I'm curious if he comes back as a starter or stays as a reliever. Frankly, I don't know where to put him

Just too much damn pitching :)