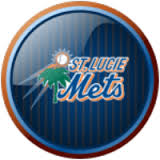 The Bradenton Marauders clubbed the St. Lucie Mets 9-4 on Saturday at Tradition Field.

The Marauders pounded out five extra base hits including three doubles by Pablo Lopez, who drove in three runs. Taylor Gushue hit a two-out, two-run homer in the fifth to give the Marauders a 4-1 lead.

The Mets trailed 6-1 in the eighth but Amed Rosario brought the crowd of 4,247 to life with a long three-run homer that made it 6-4.

However, Chase Simpson crushed a bases-clearing triple in the ninth that finished off the Mets and put the Marauders back ahead by five, 9-4.

Bradenton starter Brandon Waddell was brilliant through seven innings. He scattered three hits and did not walk a batter while striking out six. The lone run he gave up came in the first on a Rosario sac fly.

Josh Edgin pitched a scoreless first inning in a rehab appearance before the game was turned over to Scarlyn Reyes in the second. Reyes struggled for the third time in three outings. He lasted just 3.2 innings and surrendered six runs. He walked six, thew two wild pitches and did not record a strikeout.

Jhoan Urena went 2 for 4 with two doubles in the loss. Rosario drove in four runs, a season high for a Met.

Notes: The Mets failed to extend their winning streak to three games. They have four two-game winning streaks but have not won three in a row yet…Wuilmer Becerra’s six-game hitting streak came to an end…Rosario (2) has half of the Mets homers (4)…The Mets fell to 3-4 in their season-long eight-game home stand…Tim Peterson pitched 1.1 innings of scoreless relief, extending his season-long scoreless streak to eight innings. He did allow two inherited runners to score.

Rehab Update: LHP Josh Edgin appeared for the sixth time. He struck out the first two batters of the game and worked around a two-out error by getting a ground out. It was the second time Edgin pitched a full inning. He has not allowed a run since his first appearance.
Posted by Mack Ade at 7:00 AM