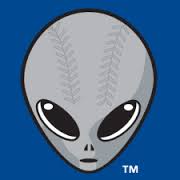 After losing on a walk-off homer and four Las Vegas dingers to open the season Thursday night, the Fresno Grizzlies put on a power display of their own on Friday for their first win of the season. In an 18-hit, 15-10 decision, seven Grizzlies collected multiple hits (Kemp, Fontana, Reed, Worth, Singleton, Moran & Pena), while all nine starters hit safely. Six different Grizzlies drove in a run, and Fresno scored in every inning aside from the second and seventh.
For the second consecutive night, the Grizzlies jumped on Vegas and took a first inning lead. After Nolan Fontana drew a one-out walk, A.J. Reed tattooed a Seth Lugo pitch off the wall in center. At 433 feet, it would have been a homer in just about any other PCL park, but made the score 1-0 Fresno by scoring Fontana from first. Reed later scored on a line drive RBI single by Jon Singleton to left, and the Grizz led 2-0 after just three outs.
Fresno surged to a 5-0 lead in the third, sending seven batters to the plate, scoring thrice on three hits and two walks. All three runs were driven in on non-hits however, by Singleton (bases loaded walk), Colin Moran (fielder's choice) and Jon Kemmer (groundout). Fontana got the inning started with a leadoff double. Reed and Danny Worth scored after a walk and a single, respectively. Worth enjoyed a two-hit game for the second time in two nights, the only Grizz to do so thus far.
The score was 7-0 an inning later; a Tony Kemp one-out single to center followed by a Fontana walk both scored on a two-out infield hit by Worth up the third base line, aided by a wild throw to first by third baseman Matt Reynolds, which rolled into right field foul territory.
That's all the damage the Grizzlies would do against Lugo (0-1), who lasted just four innings. He allowed five earned runs on nine hits, with four walks and three strikeouts. Reliever Dario Alvarez didn't fare much better, and was touched up by Fresno for a second straight night in the fifth. To begin the frame, Moran singled, Kemmer drove him in on an RBI double to the warning track in center, and then Kemmer scored on a Roberto Pena run-scoring single to make it a 9-3 game.
In the sixth, Singleton slammed a majestic solo homer to right-center off reliever Stolmy Pimentel. His first of the year and third RBI of the night made it 10-6 Fresno. The onslaught continued in the 7th, with Fontana's second hit, an RBI single, and A.J. Reed's second run-scoring double of the night to make the score 12-6. It was 13-6 after Singleton collected his fourth RBI on his third hit with a liner up the middle. Moran made it 14-6 on a RBI double that bounced off first base and rolled down the right field line as all nine Grizzlies batted in one inning for the first time this season. Reed, Singleton, Moran and Kemmer all finished with multiple RBI.
Asher Wojciechowski (1-0) earned the win in his season debut, going five innings, allowing seven hits and six runs (all earned) with two walks and three punchouts.
This is a re-print press release from Fresno. Las Vegas doesn't produce any.
Posted by Mack Ade at 12:00 PM