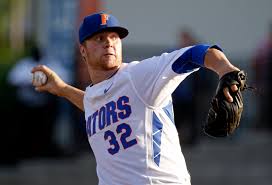 
Barnegat H.S.(NJ) LHP Jason Groome threw a 19 strikeout no-hitter on Monday with a last pitch 94-mph fastball (97 in first inning). And then... he was suspended for up to 30 days for transferring from one school (IMG Academy (FL) back to Barnegat where he played his freshman and sophomore season. Seems he didn't get permission from anyone for the transfer.

The rage of the college season continues to be Clemson freshman Seth Beer, who hit his 14 home run on Tuesday against Western Carolina


Cal RHP Daulton Jefferies is 'day to day' with a calf injury... I have him as the 23rd pick overall in the draft...

A few thoughts on Nick Banks –

From Minor League Ball - Nick Banks is an outfielder for Texas A&M, who will be entering his Junior season this fall. He is currently seen as a 2016 first round draft prospect. Let's take a more in-depth look at him.

Banks is a 6'0", 200 pound outfielder who graduated from Tomball HS in Tomball, Texas. He went undrafted in the 2013 draft, but that was due to a combination of his college commitment and some injury issues during high school. He had quite a successful high school career, though. He was named a Perfect Game All-American and went to the playoffs all four years, including a championship run his senior season. As a senior, he hit .531 with nine home runs and only twelve strikeouts in 136 trips to the plate.

From The Baseball Draft Report - Dalbec deserves a lot of credit for battling back from a slow start to now have a more than respectable 2016 overall batting line. He also deserves respect for being one of the realest 2016 MLB Draft prospects out there. What you see is what you get with Dalbec: massive power, lots of whiffs, and a fair amount of walks. His arm and athleticism help make up for a lack of easy lateral quickness at the hot corner, so sticking at third should remain an option for the foreseeable future. The older, popular, and common comp for him has been Troy Glaus; on the flip side, I’ve heard Chris Dominguez as a possible outcome. The Glaus ship appears to have sailed, so something in between that and Dominguez would be a fine professional result.


The University of Miami became the number one ranked college team after this month's sweep of Clemson and North Carolina and one game win (other two games snowed out) against Notre Dame.


These were no new mock drafts this week to add to the equation, so the current two players projected to be the Mets picks remain –

For the sake of reference, here are the top 12 right handed pitchers currently in the draft –

I have to say i know nothing about the draft, but I feel like Ian anderson an east coast prep power righty looks like a good option. Obviously prep pitching is a crap shoot, but considering these players are all at least 2 maybe 3 years away most likely, and this is the year to use that extra first why not.

Nick Banks is looking good to me

Ian Anderson goes to the high school I graduated from, and for our area to produce an athlete with any interest from professional sports is a huge deal, being in Upstate new York

I crawled over to the typewriter while my bride slept to give you a quick update.

Going yo VA Hospital today with a copy of xray taken... actually, I don't feel any better that when this all started...

Yes, Anderson is a local kid, actually saw his HS team play on Friday. He didn't pitch. Word is that he hit 98 on the gun last week. Rail thin, headed to Vanderbuilt until some team drafts him and offers big money.

Must be so tough for those top colleges to recruit players.