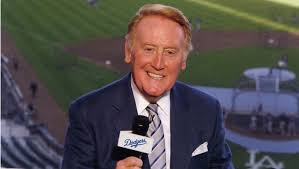 
Well... got closer last night folks... I'm not calling for any panic yet, but the Met may want to start adjusting things with a rest for d'Arnaud and adding Keven Plawecki for a few days to see what he could add to the equation.

Mack -Off-topic (sorta).  Do you know if it is possible for SNY to provide (at least) one inning of Vin Scully game-call when the Mets are in LA next month?  It would really be a treat, and it’s last opportunity.  I’m sure Gary t. al. wouldn’t mind.

Maybe the Mack’s Mets folk could start a petition?

Mack – Conrad, that’s a great idea, but I don’t think anyone in the Mets organization could care what we at Mack’s Mets think.
What I do know is a certain member has an active email relationship with Sandy Alderson and, hopefully, he could pass your thoughts on to him and get the ball rolling.

I can’t believe how many years this man has been on Dodgers games. I idolized him when I was a kid and I’m turning 70 next February.

Again, what a great idea.

The Mets added Rafael Montero to the Mets pen to help out after the Steven Matz blowup. The Mets sure wished they had someone in the second inning of that game that could have pitched 4-5 innings. Frankly, I don’t expect Montero to be used unless it is absolutely necessary. My guess is he will miss one Las Vegas start.

The Mets Twitter feed is strong and wrong early on this season. They have pretty much called for the head of every single Mets front office member, most of the players, and even Mr. Met is getting some heat. All you have to do is listen to WFAN or go to Twitter, type in #MetsTwitter, and stand back. Now, trust me here folks…  the Republican party is in much more disarray than the Mets are so far this season. Sure, it’s a horrible start, but the schedule does favor the team for the rest of April. Past Wednesday, there is one more game against the Marlins, three verses the Phillies, and three verses the Braves, all coming before April 25th. Hang in there folks.

P Dub isn’t happy with the Mets start, but says there is hope –

Cut back to 2016, with a loaded Mets team that’s been bitten by the injury bug and is off to a slow start. There’s almost literally an entire season left, but Mets fans will be eyeing the nearest high parapets until further notice. Fortunately, there are differences between this team and the 2006-8 team–namely the highly touted Big Four pitching staff. Even with deGrom sidelined, the Mets can afford to give him adequate rest because of the depth of their rotation. Meanwhile, while their collective slump is troubling, the Mets have too much talent in their lineup to stay at the bottom of the offensive rankings for long. Manager Terry Collins might have to take the reins off of talents like Michael Conforto and Travis d’Arnaud, instead of burying them below the middle of the lineup; but the Mets will likely begin hitting sooner rather than later, and if the pitching remains true to form, the exodus from the Citi Field outpost of Panic City can finally begin.

In case you're wondering, the Mets were 3-3 through their first six games last season. And how quickly we forget that they were only 52-50 on the morning on July 31 (when they acquired Yoenis Cespedes and went on a tremendous late-season run).

Kevin Kernan of the New York Post, someone I normally speak highly of because he always treated me with respect, wrote a story entitled ‘Scout Calls For Steven Matz Demotion as Collins’ Worries Grows’ ... But that’s not what the scout said in the story. The actual quote was: “He looks like a young guy who needs a month in Triple-A to clean up some things.”

Shame on you Kevin for trying to sound like someone working for Ted Cruz.

Columbia won Game One of their doubleheader against Rome behind 2B Vinnie Siera's continued hot street early on this season (2-3, .500). P Tyler Baldamo six innings, givng  up only one run (1.50). They went on to also win Game Two, 3-2, with three runs in the seventh... Joe Shaw pitched six innings, giving up only two runs...

Who would have thought after 7 games that Wright would be the Mets' offensive leader?

Thor needs to learn: you are not brilliant if you ever have the audacity to surrender a run on this team. Harvey learned that lesson in 2013 and 2015.

My brother never stops ranting about how much the Mets are going to regret not signing Lucas Giolito, who'd already be in the bigs if there wasn't a concern over future free agency $$.

If Vince Scilly did an inning at a Mets game, it would probably be during a Kershaw no hitter. After all...He called Koufax's no nos.

Hope the SA contact can pursue the Vin Scully simulcast idea -- He started calling games in 1950 (Bklyn lost out in the final game to the Whiz Kids)! Fordham Pep/U kid, he tells a story of reminding GHW Bush he played against him (and both went 0-3).

Got my eye on Tyler Baldamo. Saw him in Brooklyn let year and was impressed.--under the radar and very efficient; third yr in pro-ball with a career 1.01 WHIP. Not a big K guy, but 7K/9IP and a 1.5 GO/AO.

Why is it that every year the Mets have a problem with hitting?
Hitting coaches have changed.
Talent has improved.

The only thing still the same is the "hitting philosophy" that the organization imposes on all of its hitters.

Maybe it is time to realize hitters are all different. What works for one does not work for all.

I put the Giolito info in the post just for your brother and I... :)

This is such a different opening day team than the last one.

It simply doesn't make any sense.

I was out last night so I missed the game. Evan on WFAN was ripping Duda for brainless first inning base running - he must have been trying to make something happen. He did. Not good.

Also that Cespedes hit an upper deck shot - except the wind whacked it back and kept it in the park...caught at wall...which is why I was so strong on moving the fences in a little more than they actually did. How discouraging that must have been.

This game was not lost by Duda or a gust of wind.

Need to keep focus on the forest.

Resist the temptation of being distracted by the minutiae of individual trees.

There's a chance that Thor may be the best ever...

In fantasy football they have different tiers of players ranked for each position. Thor has now created a new tier group just for himself.
During yesterday's game Hernandez threw out a Nolan Ryan comparison. He said he rarely makes comparisons like that. I actually think Syndergaard is currently pitching better than Ryan did. To me the comparison breaks down after raw stuff. Syndergaard has command of his stuff like Ryan never had. Syndergaard is still a work in progress. He can get even better and that would be scary for MLB hitters.
I never was behind all of the Syndergaard for Tulo pressure there was about this time last year. Tulo is looking better than I thought he would but still wouldn't be worth Syndergaard.