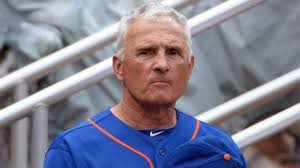 Terry Collins seemed to survive his first bonehead play this season by pitching Jim Henderson a day after throwing 34 pitchers, and bringing in Jeurys Familia for a five out save, which was his third straight day on the mount. The Henderson outing blew up in the Mets face but he was saves by Hansel Robles and Jerry Blevins. They’ll add Rafael Montero to the mix this weekend verses Cleveland.

Managers? Put it this way: it wasn’t just curious game managing but borderline recklessness for Collins to insert Jim Henderson in the seventh inning, one night after throwing 34 pitches and two years after shoulder surgery. Henderson was a good 5-6 mph slower Wednesday, but on the bright side his elbow stayed attached to his arm as he loaded the bases with none out in the seventh.

(As an important aside: much like almost every move he made during last year’s pennant push — well, right up to sticking with Matt Harvey, anyway — this worked out, thanks to brilliant work from Hansel Robles and Jerry Blevins. Collins keeps drawing to an inside straight.)

Mack – Sometimes I wonder how the manager, coaches, and players can read some of this shit and then look the writer in the eye the next day.

‘Borderline recklessness with eight games into the season?

Give me a break.

Q and A from Michael Scannell -

I'm not hitting the panic button on the season, it's far too early.  But, we're seeing the same problem- an inability to score runs.  I've always followed the minor leagues and it seems that the Mets have an abundance of position players.  I had a few questions about specific players and then was wondering what your thoughts were on my overall analysis.

- Taijeron.  He had an eye-opening ST and so far he's done well at AAA.  Is he playing himself into contention for one of the two long term OF spots with Conforto?  Can he play CF at the MLB level?

- McNeil.  The kid could hit but there were obvious questions about his power and slight build.  Now that he's muscled up, is he getting himself into the conversation for an infield job?  I see he's playing 3B...can he stay there long term and potentially take over when Wright inevitably retires?

McNeill is a project at best, though he could turn out to be a good utility infielder someday. I don’t see him as the future Mets third baseman. That job will be filled from someone outside the organization.

In looking beyond this season, I don't expect Cespedes to be back, Granderson only has another year left, and our MIF combo is a short term solution to hold down the fort while the kids mature and the big club stays competitive in the meantime.  I'm not going to anoint anyone an heir apparent to any position given the depth the organization has grown and there exists the possibility of acquiring proven major league talent to fill holes.  However, I'm looking at the rosters and seeing enough talent to potentially acquire TWO bats, but I'm not certain who would go and who would stay.

Unlike you, I will anoint Michael Conforto in the outfield. I also think that 2016 will be the year whether or not we anoint Brandon Nimmo. Past that, the future outfield is all speculation.

In the infield we have Duda and Flores up, and McNeil, Cecchini, Hererra, Smith, Reynolds, and Rosario all working their way up.
In the OF, we have Lagares, de Aza, Nimmo, Taijeron, and Becerra looking to solidify their respective statuses.

I also believe that Rosario and Herrera will be the future middle infield for many years to come.

The pitching isn't what it was but there are still some interesting pieces like Gsellman.

Right now, with the current rotation + Wheeler, Verrett, and Montero, I’m not worried about 2017.

We know Sandy considers a roster to always be in flux and I expect turnover to continue.  There are a lot of possibilities-just at 1B, does Duda stay on?  Is he traded for prospects and the job given to Smith?  Are they both dealt to acquire a better, proven 1B?  Does McNeil slide over to 1B?

I don’t happen to think the ‘future’ Mets first baseman is currently in the organization.

With so many possibilities, as I mentioned above, I can see Alderson cobbling together enough talent to fill two positions at the MLB level as well as fill the remaining vacancies internally.  This wouldn't be until next offseason and I'm expecting the bats to come around while we compete for the WS again this year.  But, am I wrong on the long term possibilities for this franchise when it comes to the depth of talent in the minors?

Well, there is depth, but mostly in the middle infield positions and in various organizational pens. Frankly, in my opinion, the system has barely 10 prospects right now.

Thanks in advance for your thoughts.

I saw that Mickey Jannis went into the 7th with a no hitter. A little reminiscent of Dickey - one night fluke or is he really getting it?

Fake all the hitters into thinking it is August 1 again, so we can go back to scoring 6 runs per game again.

Did someone mention my man jeff McNeil?

I will forever playfully fight with Mack about Dom Smith, his power, and being the future at 1B into the next decade.

Regarding 3B lets not discount the start David Thompson is having right now. Hes on fire and he's a college guy so the current low a level doesn't mean he's multiple years away.

D Smith, Currently at Double A has a chance to be a star. He was the Florida State MVP last year in Advanced A ball as one of the younger players in the league. I've read his glove is Major League ready and he will absolutely be the one replacing Duda.

While I agree it's too soon to push the panic button, once again Terry Collins has gone to the well for a veteran -- Jim Henderson -- instead of using Rafael Montero who was activated before Wednesday's game when Eric Campbell was sent down. He's rapidly becoming the Wilmer Flores of pitching, only given a chance when every other option has been totally exhausted. By not pitching him when he was due to throw anyway, you're setting him up for a self-fulfilling prophecy of failure due to rust. Bullpen management has never been this manager's strong suit.

It will be a point of interest to check the radar gun during Henderson's next appearance.

Will it bounce back?
Will there be carry over with the 5 mph drop?

Does he get more than one day off to rest?

I dunno Mack. I think that Terry's use of Henderson and Familia was sort of reckless. The downside of last year's run is that Terry in all likelihood has a very very long leash. I don't think that he handles pressure well, and it impacts his decision making.

I agree with those here who see Smith as the future at 1B. I am also not 100% sure that the next 3B comes from outside (though he probably will.) I could see Flores continuing to develop and inheriting that role in two years - after filling in there for extended stretches both this season and next (which I think is probably DW's shelf life.) I don't think that David Thompson is a real 3B prospect anymore given his injury history and the apparent toll that's taken on his throwing. It's a shame because his bat may grow up to fit there. Rosario would be a consideration for future 3B, and could still be if he fills out and Cecchini takes another leap forward this season, but I'm guessing that he sticks at SS, and Cecchini is a utility guy or trade bait. I'm really excited to watch Rosario's development this season. I think the bat comes alive.

Finally, I read somewhere yesterday that Gsellman was clocked at a legit 98 mph in his first start. If that's true, and he can be a 95+ guy instead of a 92-93 guy, his prospect status will jump this year.

That is quite a jump in velocity! In just one year too.

I would love to hear about what has contributed to the improvement.

* I would give Henderson the day off today, certainly. And I do think using him on Wednesday was reckless -- and it also went against TC's stated goal, that he wanted to win. If not for Robles incredible bases-loaded performance, Henderson gives up a couple of runs and is the losing pitcher. So it was dangerous for Henderson, coming back from two shoulder surgeries, and poor strategy too. The guy had nothing, predictably. It all spun out in less-than-ideal ways; sometimes games are like that. The Mets won!

* Dom Smith has a way to go. There are some promising signs, and some red flags. I'm not confident in either direction. Fortunately, there's no need to be. Let's see how he progresses.

* I didn't like Thompson at 3B because of agility issues -- he kind of lumbers over there -- and now that his arm is extremely suspect due to injury, it's hard to think he's the answer at 3B.

* Yes, good news on Gsellman. I like guys who throw hard. I hope it sticks.

* I see we are back to the chronic complaint about TC. He certainly is flawed, but I respect that he desperately wanted to win that game against the Marlins. How would the team have responded if he went with Montero . . . and lost the game? Terry doesn't have much faith in him, for understandable reasons. Montero is only up for "statement" reasons -- to let the kid know that the big club still has him in its plans -- but not to be used in tight spots. He had a woeful Spring and, frankly, a woeful 12 months. There was a day off the next day and TC pushed hard for the win. I can't kill him for that, except in regard to Henderson.