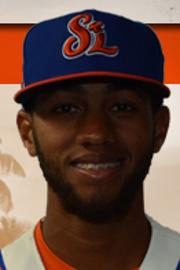 The St. Lucie Mets started the 2016 season with a bang, beating the Jupiter Hammerheads 6-5 in walk-off fashion on Thursday at Tradition Field.

Amed Rosario, one of the Mets top prospects, belted a leadoff home run to right field in the top of the ninth to break the 5-5 tie and win it for the Mets.

The Mets trailed Jupiter 4-1 in the bottom of the sixth but rallied to take a lead. Michael Katz lined a two-run single with two outs that turned a one-run deficit into a 5-4 advantage.

Jupiter tied the game in the seventh on a RBI single by Brad Haynal.

The Hammerheads put the go-ahead run on third base with no outs in the top of the ninth, but Tyler Ard tried to score on a routine grounder to third and was thrown out easily by Jhoan Urena.

Robby Coles worked a scoreless eighth and ninth to get the win.

Notes: Starter Josh Prevost gave up one earned run in 3.2 innings. He threw 80 pitches…Rosario had three hits and two strikeouts…Luis Guillorme went 2 for 4 and had a walk…Jupiter had 15 hits…every Hammerhead had a hit.