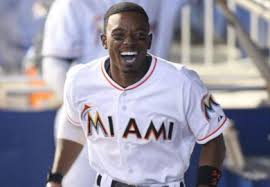 First, I watch the NFL draft last night and see projected top five pick, OL Larry Tunsil, dropping like dead flies after someone posted a picture of him hitting a bong, with a gas mask on, on his Twitter account.

Then I go online and find out that Dee Gordon, one the best ballplayers in baseball and the reigning National League batting champ, has tested positive for PEDs.

Buster Olney /ESPN put it best about actions like these: A player taking PEDs now is choosing to cheat brethren working for a level playing field; he's taking service time and money from somebody else.

The first thing that comes to my mind are they just simply stupid. Both Tunsil and Gordon are superstars in their respective sports and need no chemical help to succeed.

I have two simply solutions to ‘things’ like this.

First, one… forget an 80 game suspension. Make the 80-game only used if there are 80 or less games left in the season. If not, suspend the player for the entire season.

And two… cancel any existing long term commitment to these players and just have his current year’s salary available to him that… oh… yeah… that will be suspended and he won’t get that either.

I wouldn’t expect the player’s union to rollover here, but you create these kind of fines and I assure you these players will take these chances far less in the future.

Ernest Dove asked me yesterday if I noticed that St. Lucie slipped in a couple of players that had been working out on the other side of the complex.

Catcher Brandon Brosher and outfielder Raphael Ramirez were added to the roster for reasons unexplained which is normal for the way St. Lucie operates. Adding players directly from the extended camps is a cost efficient way of filling in a slot that usually has been created by someone going on the disabled list, coupled with not desiring to move someone from Columbia this early in the season. I have no idea what has happened to either catcher Lednier Ricardo or outfielder Patrick Biondi.

I’ll reach out to team spokesperson Adam McDonald for an explanation and will get back to you if I find out anything.

Update – got this email from Adam –

I think it's a mistake to conflate Tunsil hitting a bong with Gordon taking PEDs.

A lot of people are calling for the termination of the contract, and I don't see that happening. A $50 million penalty?

Also, it would make Gordon a free agent . . . and teams would line up to pay him. In the end, he'd probably benefit.

Longer than an 80-day penalty? I think we might see that.

I wonder if you could slip someone a single supplement like this and it would register in a test. Or sprinkle it in a meal unnoticed. Perhaps I am watching too many movies. But imagine if a guy tested positive that way but wasn't taking.

Mets gone wild. The 100 WIN steamroller has been fired up and is filled with high test fuel, baby. I having a feeling this team is unstoppable. Before last night's Mats WIN, their hitters other than Harper and Murphy were dismal. Rendon had 1 RBI in 21 games, for instance....I think the Mets will show....the Mets are just BETTER.

ERNEST, DOM SMITH doubled his HR total to 2 last night...lmaybe he is ready to play Powerball. Many forget he is only 20 until mid-June.

Lastly, Mack, you could also ask Adam the status of Jeff McNeil, out on the DL after the first 3 games.

Yeah Dom went all opposite field with that homer ;)

James, come on, that seems pretty unfair. Should you add Walker and Thor after Arrietta and Turner?

I didn't lop Tunsil and Gordon together. I was explaining what hit my ears in less than one day about illegal drug usage and sports.

So, we don't agree about taking away a multi-year contract... let's start here first...

do you agree the minimum should be either 80 games of the entire season, whatever the most is or what is left?

I'd give them 50 games, not 80. Even though the idea of someonecslipping someone something is remote, i hate to see a guy lose 80 games of what for most a short career if there is any chance it was accidental or nefarious.

Question, is smoking pot any different than going and getting smashed on booze and getting DWI's? Getting an 80 game ban for smoking pot is ridiculous (isnt that what happened to Mazzilli?)