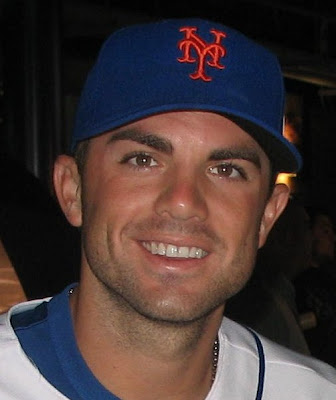 Division Preview - 1. New York Mets - This kills me picking this organization to win the NL East. I grew up in St. Louis and absolutely detested Strawberry, HoJo, Dykstra, Mookie, Doc (I snort after every game with Darryl)Gooden, Sid (I'm a fat elephant)Fernandez - God I hate them and the list goes on and on. How much did I love Wainwright (a rookie) buckling Beltran's knees in game 6 of the 2006 NLCS...well - let's just say I am still excited about Adam doing that to Cardinal killer Beltran. But 09 is the dawn of a new era. The Mets only made 2 significant moves in the off season...but oh man were they huge. They had single season save holder Francisco Rodriguez and stud closer, who now becomes one of the best setup men in baseball, JJ Putz. That is all this team needed to add with a lineup that includes Jose Reyes, Beltran, Wright and Carlos Delgado. This team has Santana as the ace of the staff and Maine, Pelfrey & Perez as serviceable 2-4's. This team has to win their division or it will be a huge disappointment from the top down. 2009 record 96-66


David Wright said reports last week of his toe were ‘somewhat overblown,’ noting that it was only a ‘little bruised.’ … “It’s fine,” he said. “I knew it was nothing serious at the time… If I would have thought something was seriously wrong, I wouldn’t have been out there.”

Mack: it looks like Bobby Parnell has successfully been converted to a reliever, thus, he will not be in the Bisons’ rotation. Look for the rotation to be: Garcia, Jonathan Niese, Adam Bostick, Fernando Nieve, and either Nelson Figueroa (if he doesn’t get named to the Mets’ pen) or Eric Brown.


The Buffalo Bisons, Triple-A affiliate of the New York Mets, played to a 4-4 tie against the New Orleans Zephyrs (Marlins) on Tuesday afternoon from Jupiter, FL. The Bisons are now 0-2-2 in their 10-game exhibition schedule (one game lost to rain). Bisons outfielder Jesus Feliciano went 2-3 with a pair of doubles and two runs scored. Outfielder Fernando Martinez’s RBI-single in the ninth inning helped the Bisons pull even with the Zephyrs. On the mound, RHP Kyle Snyder threw three scoreless innings while Valerio de los Santos and Connor Robertson each chipped in an inning of scoreless relief.

B-Mets broadcaster Robert Ford is leaving the team to take a position with the Kansas City Royals hosting their pre and post game shows on KCSP AM. I will miss listening to the talented Ford, whose impressive preparation shone through on air. On the other hand, I couldn’t be happier for Ford in his new position. Ford will be replaced in the B-Mets booth by Matt McCabe who worked as an Ford’s broadcast intern for the B-Mets in 2007. McCabe broadcast for the Eugene Emeralds following his graduation from Rice in 2008.

Section of book on Mike Piazza:

As the hundreds of major league ballplayers who turned to performance-enhancing drugs throughout the 1990s did their absolute best to keep the media at arm's length, Piazza took the opposite approach. According to several sources, when the subject of performance enhancing was broached with reporters he especially trusted, Piazza fessed up. "Sure, I use," he told one. "But in limited doses, and not all that often." (Piazza has denied using performance-enhancing drugs, but there has always been speculation.) Whether or not it was Piazza's intent, the tactic was brilliant: By letting the media know, of the record, Piazza made the information that much harder to report. Writers saw his bulging muscles, his acne-covered back. They certainly heard the under-the-breath comments from other major league players, some who considered Piazza's success to be 100 percent chemically delivered. "He's a guy who did it, and everybody knows it," says Reggie Jefferson, the longtime major league first baseman. "It's amazing how all these names, like Roger Clemens, are brought up, yet Mike Piazza goes untouched."
"There was nothing more obvious than Mike on steroids," says another major league veteran who played against Piazza for years. "Everyone talked about it, everyone knew it. Guys on my team, guys on the Mets. A lot of us came up playing against Mike, so we knew what he looked like back in the day. Frankly, he sucked on the field. Just sucked. After his body changed, he was entirely different. 'Power from nowhere,' we called it."

When asked, on a scale of 1 to 10, to grade the odds that Piazza had used performance enhancers, the player doesn't pause.


Allen Barra says a case can be made that 83-year-old Yogi Berra was the greatest catcher in baseball history. And no ex-ballplayer is more famous today, not even Willie Mays. But a few years ago, fresh off a book about Bear Bryant, Barra noticed that there hadn't been a definitive bio of Yogi. He set out to fix that, and the result is the new "Yogi Berra: Eternal Yankee." Yogi's best known to younger generations as a lovable lunkhead, the idiot savant who talks to a duck on an insurance commercial, who said, "It ain't over till it's over" and "You can observe a lot by watching." Then there are the malapropisms that make a weird kind of sense when you think about them: When you come to a fork in the road, take it. Half this game is 90 percent mental. I didn't really say everything I said.


Despite Lou Piniella’s pronouncement that Micah Hoffpauir has made the team, the Chicago Cubs continue to consider backup infielder options for the bench. Corey Koskie is out, Luis Rivas is ostensibly out, and Esteban German has failed to impress (well, he’s been ok - just saying that he hasn’t dominated). So it may take a move outside the organization. Enter Jeff Keppinger. The Reds, to the surprise of several scouts, are considering trading infielder Jeff Keppinger, a right-handed hitter. FOX Sports. Surely the Cubs will be looking, given that they have pieces like Angel Guzman that they essentially must deal. Keppinger has only been an above average hitter in one partial season, and was worse than mediocre at the plate in extended playing time last year. But as my friends at Sons of Ivy pointed out, he’s excellent in the field, and can play a wider array of positions than even German.

Closer: #1 - Francisco Rodriguez Health and dramatic nature a bit of a concern, but still good for fifty saves.

Starters: - #2 - Johan Santana Too many questions about health and declining numbers to stay #1.

OF: - # 2 - Carlos Beltran Still has a couple more monster years in him.

George Kell, the Hall of Fame third baseman who edged Ted Williams for the 1949 American League batting title and became a Detroit Tigers broadcaster for nearly 40 years, died Tuesday. He was 86. Jackson's Funeral Home in Newport confirmed the death but did not give a cause. The Hall of Fame said he died in his sleep at his home in Swifton. Kell was severely injured in a car crash in 2004 but was able to walk with a cane about six months later. Kell outlasted Williams for the 1949 batting crown, hitting .34291 while the Boston Red Sox great finished at .34276. Kell played 15 seasons in the AL, hitting more than .300 nine times and compiling a career average of .306. He was a 10-time All-Star.

I want to let all of THT's readers know that one of our most prolific writers and favorite people, John Brattain, just passed away. Many of us got to know John through the Baseball Think Factory, where his good humor was always on display. John joined the THT writing team more than four years ago, and he further honed his extraordinary wit, humanity and sense of fun every week on our site (and elsewhere). For a while, he even contributed twice a week. He was one of the people who made THT a truly rewarding experience for all of us.