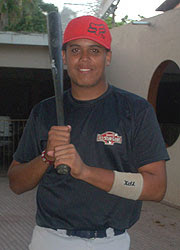 The Mets signed undrafted free agent Pena, the son of Yankees first-base coach Tony Peña, to a $750,000 signing bonus, in July 2006. He was first sent to the Mets Florida Instruction camp, where he remained for the remainder of the 2006 season.

Baseball America had one international scouting director (in 2007) termed Pena's body as "heavy and thick." Willie Randolph was quoted in January 2007 to say: "he's a little different than I remember. He's a big boy. I saw Ken Griffey and all those kids come through . . . Jessie Barfield's kid (Indians second baseman Josh). It's amazing to see how they've grown and to see the resemblance in some ways. You can see the evolution, and it's weird to look at that."

Pena, is considered to be one of the best catching prospects in the Dominican Republic's baseball history. His initial claim to fame so far in his career is he caught the controversial pitcher Danny Almonte on that infamous Little League World Series team.

Unlike Tony Pena Jr., Francisco followed in his father's footsteps and donned the tools of ignorance. It was mostly his defensive skills earned him a $750,000 bonus from the Mets in July 2006. He certainly shouldn't have been expected to hit as a 17-year-old in full-season ball in 2007. That he finished as poorly as he did was discouraging, but he has a lot of time left to figure out what he's doing in the box. He could at least be good for 10-15 homers someday. The OBPs likely will always be subpar. He's due to repeat the Sally League in 2008.

From Toby Hyde: - #7 - C Francisco Pena - By Toby Hyde - Youth: Pena turned 19 in October 2008. At the age when many players drafted out of high school would be beginning their first full professional season, Pena will be beginning his third. More germane than the experience he’s garnered, is the room (and time) that he has to improve. Position: Catchers, as a whole, were the least productive MLB position at the plate in 2008, combining to hit .257/.325/.390 with a .715 OPS, three points lower than SS. Just four catchers in baseball hit 20 homers in 2008 (Brian McCann, Geovany Soto, Kelly Shoppach and Mike Napoli). Only 15 hit double digit homeruns. Pena, who led the SAL with 28 passed balls has work to do to become MLB caliber defensively, but the same can be said of almost all minor league catchers. On the plus side, he has soft hands and a strong arm. His footwork and anticipation must continue to progress. Power: Pena has the plus power that only a few MLB backstops possess. When he grows up, he is capable of 20 HR annually on the high end. He has bat speed, strength and the ability to drive the ball comfortably. Of the catchers who hit 20 HR in the majors in 2008, only Soto was an international signee like Pena, who has shown more power than Soto did at the same age against tougher competition. Soto his first three seasons to hit the same number of HR (6) as Pena did in 2008. Soto never hit more than nine HR in a season until exploding for 26 at AAA Iowa in 2007 as a 24 year-old. 2008: The Mets had Pena begin his professional career as a 17-year old in the SAL in 2007. In 2008, as an 18-year old, which is still very young for the league, Pena added 14 extra base hits and 14 singles to his 2007 performance. Teammates and coaches alike agreed that Pena made major strides defensively both the mechanics of catching and the nuances of game calling. Projected 2009 Start: St. Lucie
Posted by Mack Ade at 9:32 AM