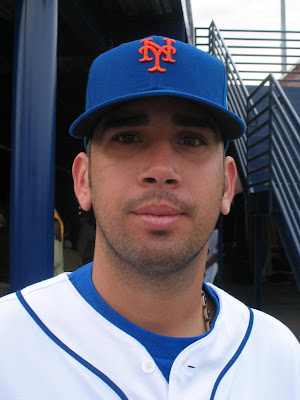 Its pretty clear that 2006 cemented that reputation as a "roller coaster pitcher" especially with the mechanical breakdown and the resulting demotion to the minors. However, before that he wasn't bad. As we're all used to hearing, Oliver Perez was incredible in '04 and his consistency reflected that. And in his time with the Mets, O-dog really hasn't been as up and down as the average fan thinks. Interestingly enough he was actually more consistent in '08 than '07 though as we all know he was definitely worse last year. So as I was saying he's definitely above the average but by no means is he the posterboy for streaky pitching as he's portrayed. Not only is he not the worst offender in the league, he may not even crack the top 5 in the division. Hell, he's been more consistent than Mr. Perfect himself, Cole Hamels. All in all, hes not a rock by any means but doesn't deserve nearly as much of the scorn as is heaped on him by the baseball media and fans alike.


Last year, Nick Evans just didn’t look ready for prime time. He came up and had a quick start but then fizzled out. But it looks like he came to camp ready to take someone’s job. Evans came up and had a 3 double game against the Rockies and went into a nose dive until late in the season when he started to get some small hits and bring his average back up. The problem with him and playing time last year was Daniel Murphy. Murphy came up last summer also and he hit from day 1. Being a minor league observer I always thought Murphy had the most hitting potential of the Binghamton trio (Evans, Murphy, Carp) and thought Evans may have the most overall potential. But Evans is not as good as I used to think at 1B. The Mets have a logjam right now so Nick Evans SHOULD go to Buffalo but he may force his way onto the roster. The hits he’s getting this spring aren’t just little line drive singles, he’s hitting the ball with serious authority unlike last year at the major league level. It may only be spring but he is really turning heads.


Ron Villone of Bergenfield endured a rough outing, giving up four runs on four hits and a walk in one inning. He got the first two outs, but then let five straight batters reach base. After three scoreless outings, he has given up six runs in his last two innings. He is in the mix for a final bullpen spot with Darren O’Day, who is a Rule 5 pick and Brian Stokes, who is out of options. It’s a decision that the Mets want to make before heading to New York.


Oliver Perez. I can’t even find the words. I didn’t think the Mets should have outbid themselves for him when other pitchers went for $4-6M. HE’S NOT EVEN A .500 PITCHER. So Mr. Perez gets a fat contract, goes to the WBC and guess what happened. HE DIDN’T DO HIS WORKOUTS. So now we have a Perez who’s arm is not ready and he’s up in weight. He’s the new Dontrelle Willis at this point. Dontrelle started to fall apart when his weight went up though with him it was more likely that he was gaining his man muscle since he was young when he was blowing them away but he did come into his money around that time. I know I was not the only one who knew something like this would happen and I was one of the biggest Perez supporters, I thought the Mets should have got him even before the Pirates sent him to the minors because they screwed up his motion and he became a bad pitcher with bad habits and I thought the Mets could help him out.


While the Detroit game was rough for manager Jerry Manuel to watch, he was able to enjoy the minor league game earlier in the morning in which Frankie Rodriguez, J.J. Putz and Sean Green pitched and were lights out. The worst part might have been discouraging the minor-leaguers who discovered whom they had to face. K-Rod needed just 10 pitches to put the side down in order, striking out two, and Putz followed with a 12-pitch inning without a flaw. Green allowed a baserunner, but still dazzled the hitters with a sidearm delivery that had them missing by a wide margin. "I felt fine out there," Rodriguez said. "It was kind of weird to start a game, but you make the adjustment. I was working on my pitches and had pretty good command

Johnny Blanchard, Binghamton Mets Baseball Shrine member and former Binghamton Triplet, died yesterday of a heart attack at North Memorial Medical Center in Robbinsdale, Minn., at the age of 76. Blanchard signed with the Yankees in '51 and was sent to Binghamton. Blanchard served in the United States Military Service during the Korean Conflict in 1953 and 1954 but when he was released from duty he returned to the diamond for spring training in 1955. After leading the Eastern League with 34 homers in 1955 playing for the Binghamton Triplets, he received a late season call-up to the Yankees. Johnny Blanchard wasn't the best Yankee ever, but he was one of the most clutch. A career .239 hitter during the regular season, he batted .345 in World Series play and hit two home runs in the Yankees' five-game win over Cincinnati in the 1961 Fall Classic. A key reserve who played in five consecutive World Series with the Yankees (1960-64), Blanchard was a catcher and outfielder. He once hit home runs in four consecutive at-bats, accomplishing the feat over three games from July 21-26,1961. But it was in the World Series that he shined. He hit .455 in the 1960 World Series, when the Yankees lost to Pittsburgh in seven games, and batted .400 in 1961, when he won the first of his two championship rings in pinstripes; his second was in 1962. Johnny Blanchard was inducted into the Binghamton Baseball Shrine in 2004.

In this, the final installment of "At Home With," we speak with Brooklyn Cyclones media relations director Dave Campanaro. Since their inception in 2001, the Cyclones have ranked among the top drawing teams in all of Minor League Baseball.

MiLB.com: How would characterize your team's fan base? Has it grown or changed in recent years?

DC: Brooklynites are extremely passionate about baseball -- and about anything that is distinctly the borough's own -- so we're fortunate in that we meet both criteria. When the Cyclones were born in 2001, the fan base was starved for professional baseball. It had been 44 years since the Dodgers left for LA and Brooklyn's heart still hadn't healed (and probably never will). That first year was all about baseball returning to Brooklyn, but it was also about introducing the Minor League atmosphere to a Major League market. Most New Yorkers had very little, if any, experience with Minor League teams -- the promotions, the wackiness, the between-inning contests, the zany antics. In those first couple of years, I think we introduced a whole new world of baseball to the New York market, and we've been building on that ever since. As time has gone on, our fan base has become much more familiar with and knowledgeable about, the brand of entertainment (and baseball) we offer. They have come to love the Cyclones for who we are and what we do, rather than seeing us as a potential replacement for the Dodgers (which are super-sized shoes that no one can fill). We still have our share of baseball purists and historians, but every year we see more and more families, kids and casual fans who enjoy not only the game itself, but all the entertainment that surrounds it. The fact that we can appeal to both is what makes the Cyclones experience so special, and what makes our fan base so diverse.


RHP Jason Isringhausen came to camp with the Rays for a chance, and he's pleased with opening day less than two weeks away to still have one. Isringhausen, 36, worked another inning Wednesday, allowing a run on two hits and a stolen base, giving him a 4.50 ERA through four outings. He is making a slight adjustment to his delivery and throwing more changeups, and most importantly he said his arm -- having undergone September elbow surgery -- feels good. "I'm just trying to stick around," he said. "I look around and the place is dwindling, and I'm still here. Right now, no word is good word." The Rays face a tough decision with the former All-Star closer, who said he is unlikely to accept any kind of assignment, even short term, to the minor leagues. "No. I don't believe so. But that's right now," he said. "I'd have to sit down and talk with everybody." Though there isn't a specific clause in his contract, he said there is an understanding that the Rays won't "wait until the very last minute" to decide so he'd have time to catch on with another team.