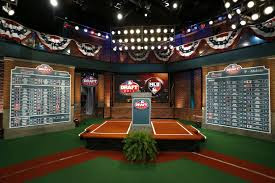 Minor League Madhouse http://minorleaguemadhouse.com/ had their spring training mock draft 4.0 and here’s who they projected as the Mets pick at #31 (compensation pick for Daniel Murphy) –

It came down to a home state product and a collegian from Georgia, but Robert Tyler would win out here mainly because of his arsenal. I feel that in the future, Tyler would make a solid bullpen arm, with the potential to start if any of the big 5 leaves. If he continues to pitch this way, you can expect him to jump back into the first round.

Mack – As most of you know, I have had to cut back on most of my draft research here on Mack’s Mets, but I’ll try and keep you up to date on what the other sites are projecting as the top Mets picks.

Beginning Sunday, Mack’s Mets will return the Sunday Morning Report to an exclusive weekly look at the upcoming June draft and what’s being reported in the draft world out there on the world wide web.

The Mets released three ex-Brooklyn Cyclone pitchers, Brandon Welsh, Carlos Valdez, and Jose Celas. Valdez comes as a little surprise to me. I though he had a decent season going last year for Brooklyn (24-G, 1.59/1.09), but he obviously became derailed in the seven games he pitched for Savannah (7.62/1.77).

We at Mack’s Mets wish them all well.

Including the postseason, Jeurys Familia recorded 88 appearances and pitched 92.2 innings last year. This came after another 76 appearances the year before. Whether that heavy load will come back to haunt him this season is unclear, but the projections say he is going to have another very good year. Familia was actually better in 2015 than he was in 2014, so it is possible a heavy workload will not wear on the big right-hander. The Mets need to hope so because the options after Familia are not inspiring.

Addison Reed is a Proven Closer, but he has only been an elite-level reliever in one season, back in 2013, after which the White Sox immediately traded him to the Diamondbacks. Reed was solid last season between the Diamondbacks and the Mets after some early-season struggles. He is an above-average reliever and should prove to be a fine fit as the Mets setup man.

Antonio Bastardo gets outs, but they come with a lot of walks. Hansel Robles has more potential, and he could be a guy that could step up and play a key role for the Mets this year as long as the home runs last year were a small-sample-size blip. Sean Gilmartin returns as long-man, but none of the other relievers inspire much confidence. The Mets rotation looks great, and there is no reason the bullpen can’t do a solid job converting the starters’ strong performances into wins.

Mack – This pen is going to have to prove to be their 2016 worth as the system goes on. My wild cards are Jim Henderson, as a late inning short man, and Logan Verrett serving them up first in after the starter.

Jacob DeGrom will finish this spring with an NL best 1.62 ERA.

Fangraphs took a ride down memory lane and featured an article that started about the Mets premier starting rotation in 1990 –
A few weeks ago, I ventured into the topic of whether the 2016 Cleveland Indians’ starting rotation had a chance at breaking the league-adjusted team strikeout rate record held by the 1990 Mets. Those Mets (comprising a front four of Dwight Gooden, David Cone, Frank Viola, and Sid Fernandez) struck out 47% more batters than a 1990 league-average rotation. That was ridiculously good in 1990, and today, it’d be even more incredible were a team able to do it, given the increase in strikeouts league-wide and the expectation that there probably is a ceiling to the strikeout trend. (Because there has to be, right?)

I have to pull back at this point and say that this has easily been the most difficult spring training for me to wrap my hands around. This team just has forgotten how to win a ball game and I’m running out of nice things to say about Jacob DeGrom and Yoenis Cespedes.

I know that Terry Collins will keep reminding me that everything so far has added up to zero, but he doesn’t really believe that. He’s a smart man and he sees how bad this team is playing.

Let’s hope something positive happens against the Cubs in Las Vegas.
Posted by Mack Ade at 8:00 AM

Lose the 2 to the Cubs, then reel off 10 straight wins.

Familia was not good yesterday. Let's hope there is an ON switch.

No one seems to be running to this site anymore to read and discuss matters about this team. Readership is off as much as woman's negative poll numbers for Trump.

I really hope this team turns this around soon.

It is puzzling, Mack. There is still quality stuff on this site for fans to banter about. I think the excitement is lower because of the crappy spring. Start winning (and we know they will) and readers will start commenting again.

I think the passion generated by ...
R
eynolds vs Campbell in lieu of Tejada?
Henderson & Monelli to the 25-man?

I don't know either.

There was a time that Mack's Mets was the only DAILY Mets blog that targeted itself to the minor league players. Now there are 10+ other sites that do that, with editors that are younger, attend the games, and know the players.

Additionally, Mack's Mets has moved toward the center and has much more info on the 25-man Queens team.

Lastly, we have also lost some great writers like Stephen Guilbert and Christopher Soto. Both turned out quality posts.

I don't know... I look upon this now as my job on a newspaper under the rumored threat of closing its doors.

Its been all downhill since Muno was taken out of big league camp from us.
I think Tom would agree

We have not heard the last of Danny Muno. Danny is da man. Not a bad spring. Even with Ruben gone, there are multiple candidates for that 25th guy. If guys in the infield stay reasonably healthy, whoever it is won't play much...Flores will suction up most of the games the 4 starting IFs sit out. Danny had his shot in 2015, failed to jump on it.

Do you have a good enough working relationship with another Met blogger to find a merging of sites beneficial and rewarding?

Unfortunately, it seems negativity turns out the crowds. Not just here, but on other sites that invite comments, there are those who only post to complain about the manager, GM, owners, and various players. I'd bet that if Cespedes hadn't returned, for example, we'd be seeing a lot more posts. But things may percolate starting Monday, if the team should get off to a less-than-perfect start. We'll see.

Meanwhile, tonight's game from Las Vegas vs the Cubs is scheduled to be televised on the MLB Network at 8:00 EDT.Sewald, a LV native, gets the start in place of Jake (a nice gesture by the Mets). This is a chance for those who haven't seen the stadium there to check it out.

I think a lot of sites do better when times are bad. There's a political site I go to...but usually only when I'm mad about something. When you're mad about something, you want to hang with people who are just as mad as you are. And if they aren't...then what the heck is wrong with those people?

Coming off a largely unexpected appearance in the Series, it's like everyone just finished Thanksgiving dinner. You don't immediately start hungering for Christmas dinner. You don't even want to think about food for a while. You're stuffed. If the Mets open poorly, I'd bet your readership will go up. If they open well, it probably won't. That's just human nature. Spring Training doesn't count because, well, Spring Training doesn't count. Even then, during a long spell in the baseball desert, people want to gather and talk in the spring because, once the season starts, hope flies rapidly out the window if you've been a losing team.

Like the ten-year-old kid who never spoke, though doctors could never figure out why. One day, at dinner, he says "Pass the salt." Jaws drop. "Son, you haven't spoken a word in all these years." "Well, yeah," the kid says. "Everything's been fine up 'til now."

You probably are right.

When I started, I was the only site that specialized daily in the Mets affiliates and the minor league players. That's what made this site different.

I agree with you about the Thanksgiving analogy. Nothing made me happier than watching Game 1 in last year's World Series... and it din't bother me when Lucas Duda thew the ball away to home. It was a great year that I never thought I would ever see again in my lifetime.

And frankly, I and probably a lot others out there are still a little 'full'.