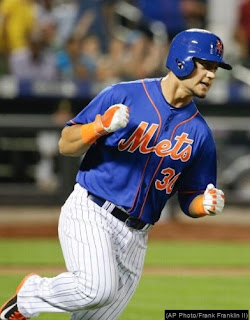 Saturday night at Citi Field, Chris Stewart's RBI single to center broke at 3 all tie in the top of the 14th inning. The Pirates go on to beat the Mets 5-3. In the 14th Francisco Cervelli led off with a double to left.  Starling Marte then hit a bouncer to 1st. Daniel Murphy took the bouncer and made an ill-advised throw to third to nail Cervelli but it was way short. That made it 1st and 3rd with no outs and opened the doors for the Pirates.  Stewart singled up the middle to make it 4-3, Sean Rodriguez followed with a pop RBI single to score Marte for a 5-3 lead. The Pirates got to Jonathon Niese early.  In the top of the first Andrew McCutchen walked on a close 3-2 pitch and that was followed by a 2 out Aramis Ramirez 2 run homer, his 12th on the year and it was 2-0. Gregory Polanco who went 3 for 6 on the night led off the top of the 3rd with a solo homer, his 7th and it was 3-0 Pittsburgh. That’s the way it stayed until the 7th inning. Niese left after going 6 innings settling down to allow just 5 hits the 3 runs (earned) walking 2 and striking out 5 eventually getting  a no-decision.  Charlie Morton was cruising for the Bucs allowing just 2 hits through the first 6.  In the 7th Juan Uribe led off with a long solo homer to center, his 12th on the year and 4th as a Met to make it 3-1.  Travis d’Arnaud reached on an error by Ramirez.  Michael Conforto then clubbed a two run home run to right, his 2nd on the year to tie the game at 3. The Met bullpen held the Pirates down in the 7th, 8th and 9th with Carlos Torres, Tyler Clippard and Jeurys Familia tossing scoreless innings.  In the top of the 9th, Yoenis Cespedes who went 2 for 6 with a stolen base threw out Sean Rodriguez at third in a thrilling play on a gapper in left. Hansel Robles pitched 3 scoreless, Sean Gilmartin was charged with the 2 runs in the 14th and is the tough luck loser falling to 1-1. Joe Blanton pitched 3 innings striking out 6 gets the win he’s 2-0.  Mark Melancon pitched the bottom of the 14th for this 37th save.  With the loss the Mets have dropped 2 straight to the Bucs and now stand at 63-54 overall and 42-20 at home.  The Mets remain 4 1/2 games ahead of the Nats as they lost to the Giants Saturday night.Sunday afternoon is the final game of the series.  Matt Harvey (11-7 2.61) goes for the Mets, Jeff Locke (6-7 4.43) goes for the Bucs.
Posted by Unknown at 11:15 PM

In over 45 years of watching baseball I have never seen a game called as bad as Bob Davidson did today. Pitches on the outside corner being called balls. Pitches 3 inches further outside being called strikes.
The one positive he was equally awful for both teams. I'm not blaming the loss on him because he may have hurt the Pirates more than the Mets.
Also not ready when Robles makes a pitch. Some guys need to be forced to retire when they get too old to perform their job at a decent level.
Richard Jones