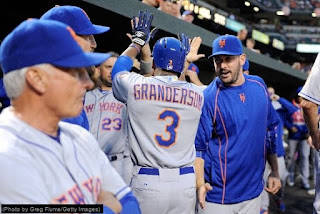 Tuesday night at Camden Yards, Curtis Granderson hit a pair of homers and Jacob deGrom was his usual self, the Mets beat the Orioles 5-3.  Granderson now has 22 homers on the season. He led off the game against Baltimore starter Kevin Gausman with a solo homer, # 21 to make it 1-0. That also set the Met record for lead off homers in a season with 7. Breaking the old record set by Jose Reyes.  In the third inning, Wilmer Flores singled and Daniel Murphy hit a double down the left field line scoring Flores from first and a 2-0 lead.  In the 5th Granderson did it again hitting his 2nd dinger of the game, #22 on the year and  it was 3-0.  deGrom was nearly flawless. His only mistake came in the bottom of the 6th inning when Gerald Parra hit a 3-1 pitch over the wall in right, his 4th homer on the year and it was 3-1. In the top of the 9th some shoddy fielding by the Orioles led to 2 more runs. With the bases loaded and no out Murphy added a sac-fly to make it 4-1. A wild pitch by Brad Brach brought home Wilmer Flores with the Mets 5th run. deGrom went 7 2/3 strong innings allowing just 5 hits the 1 run (earned) walking 1 and striking out 5.  He gets the “W” improving to 12-6 and his ERA falls to 1.98 on the season. Tyler Clippard picked up the final out of the 8th and left with 1 out with runners on 1st and 2nd in the 9th. Things got dicey as Jeurys Familia came in and walked in two runs with the bases loaded to make it 5-3. Familia finally retired Manny Machado to put the fire for his 33rd save. Gausman takes the loss for the O’s he falls to 2-5.  Offensively Grandy led the way as the Mets made the most out of their 7 hits.  Murphy also had a pair of doubles  and 2 RBI for the Mets.  The Nats are playing in Colorado. The Mets have a 5 game lead at the moment that can swing a ½ game either way pending that outcome.  With the win the Mets snap their mini three game losing streak. They now stand at 64-55 and improve to 22-34 on the road. Wednesday night is the final game of the brief 2 game set. Noah Syndergaard (7-6 3.07) goes for the Mets, Ubaldo Jimenez (9-7 3.92) goes for Baltimore.
Posted by Unknown at 10:51 PM

Had to sweat that one, but when you win, the sweat evaporates quickly.