Ruben Tejada – projected AAA – I don’t know what position to put this kid under. Half the people in the organization tell me he will play second in 2010, while the other half say he’s staying on short to replace Jose Reyes someday. We’ll have to wait and see. The one constant is the fact that he will play AAA at 20 years old come April

Reese Havens – projected AA – another shortstop that plans on converting to second, Havens showed some decent pop last year at Lucy and he just may be stepping up to that plate after a dismal first year with the Mets in 2008 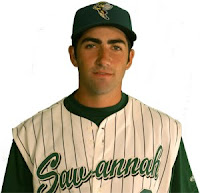 Josh Satin – projected A+ - a very decent year at Savannah, Satin finished the 2009 season exactly where he will start it in April

Jordany Valdespin – projected A – Valdespin returns to the scene of the crime in April, when he returns to the team… and manager… that not only suspended him, but banished him off the island. There may be more than fireworks night on Friday in Savannah come spring. Oh yeah… just one hell of an athlete... in fact, Baseball America voted him the top athlete in the Mets chain.

Nick Giarraputo - ??? – here’s the odd man out. Finished strong in 2009 with Savannah, but where does he play every day?

Hector Pellot - ??? – boy, remember when this was going to be one of the great ones. For his sake, I hope he’s released so he can catch on with another team before they firm up rosters

Josh Peterson - ??? – time may have run out for Josh, but if it didn’t, he’ll play AAA again as a utlilty guy

Overall:  Actually, second base is starting to look pretty good in the Mets chain... there's a good chance the Mets will not have to look outwood for Luis Castillo's replacement and they might be cheap set at this position from 2011-2015