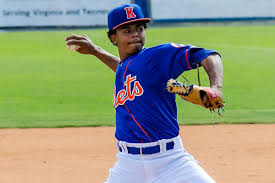 COLUMBIA, SC – Yeizo Campos flashed five scoreless innings and recorded four strikeouts out of the bullpen for the Fireflies on Saturday night. The righty was on fire the moment he entered the game, retiring the first 11 batters. Despite the strong outing, the GreenJackets outlasted the Fireflies 7-5 in 11 frames at Spirit Communications Park.

Columbia (12-16, 46-49) had an opportunity to pose a threat, game tied 3-3, in the bottom of the ninth, but Augusta’s (12-17, 49-48) defense came up clutch. After Hansel Moreno led off the stanza with a single, Edgardo Fermin bunted the baseball on top of the plate (fair ball). GreenJackets catcher Rob Calabrese quickly pounced on the ball and turned a double play.

Bottom 7: Moreno led off with a single, advanced to second on a balk, and then stole third base. Fermin scored Moreno on a sacrifice fly. COL 3 | AUG 3

Top 10: With Heliot Ramos at second to start the frame (per MiLB extra inning rules), Ismael Munguia smashed the first pitch he saw for an RBI triple. The Fireflies limited the damage though when Fermin turned an inning-ending double play.  AUG 4 | COL 3

Bottom 10: Scott Manea began the inning at second base and advanced to third on a wild pitch. Quinn Brodey tied the game with a sacrifice fly. COL 4 | AUG 4

Marcel Renteria made his second start on the mound since returning from the disabled list. Renteria tossed three innings and allowed three runs (all unearned). The righty finished with three strikeouts.

Moreno registered his first three-hit game of the season on Saturday night. The 21-year-old has collected five hits so far in this series.
Posted by Mack Ade at 7:30 AM