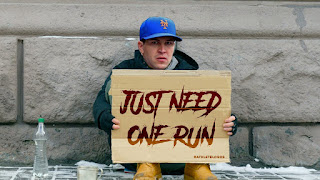 Now that the first big domino has fallen during this year's baseball "trading season" in the form of Manny Machado, the trade has set the bar for what to expect in return for a star quality player.   So what exactly did the Orioles obtain for their Short Stop, sometimes Third Baseman?
OF - Yusniel Diaz (AA)
RHP - Dean Kremer (AA)
3B - Rylan Bannon (A)
RHP -  Zach Pop (A and AA)
3B - Breyvic Valera (AAA)
I do not pretend to be an expert on minor league prospects, but I do know enough to recognize a pretty sizeable return when I see one.  From casual reading, Yusniel Diaz is the key part of the return in this trade and he is largely considered a future stud who will likely be ready to play in Camden Yards before too much longer.  Kremer, Bannon and Pop are also legitimate prospects that could find their way onto the Orioles roster in the near future.  Valera is more of a "throw in" type, but was putting up respectable statistics prior to the deal.
The top four players in the deal were assigned to Baltimore's AA affiliate, with Valera getting sent to AAA.
I am not sure where they ranked respectively within the Dodgers' deep system, but that is quite a haul for what could be a three or four month rental of an admittedly "star player".
Since we are Mets' fans here, how does this relate to our favorite club?  I am not suggesting that we could have, or even should have tried to trade for Machado.  I shudder to think what would be left in our system if we attempted to put together a deal that could rival what the Dodgers just dealt to the Orioles (but that doesn't mean we can't try to sign him in the off season, as a free agent, but that's a different article for a different day).
No, I put together this article to compare the basic worth in trade between Machado and Jake deGrom, who is our very own "star" player who might be on the trade block.
Look, I understand that Machado is younger (26) then Jake (30) and that he plays pretty much every day, as opposed to a starting pitcher who only contributes every five days, or so.  That alone makes a straight comparison tricky, but not impossible.   One might also argue that there are fewer "stud" pitchers then there are position players, so pitchers are more valuable.  Or, that in a short playoff series, a dominating starter can have a huge impact in multiple games.  Either way you look at it, Machado and deGrom are both wonderful players in their respective prime and are worth of a very large trade package as compensation, as we just found out.
Statistically, comparing pitchers and hitters is a bit awkward, but you can use WAR (Wins Above Replacement) to draw a parallel.
***Machado has 30.9 career WAR, which equates to a seasonal average of 4.91 per year (excellent).  More specifically, he has generated 2.9 WAR so far, during the 2018 season which is very good.
***deGrom has 23.2 career WAR, which equates to a seasonal average of 5.52 (also excellent), due to fewer games played to date.  Jake has also produced 6.0 WAR so far this year, which is bordering on legendary status (ridiculous).
While deGrom has a slight advantage when using WAR, you could argue that Machado has produced at this pace for a bit longer and he likely has more time left in his career so they are pretty even.   I would agree with that statement, but there is a bigger difference here that has yet to be discussed and that is years of control that their respective teams have over the listed players.
Machado is owed roughly seven million dollars for the rest of 2018 and then is an unrestricted free agent at the end of the year (which is the only reason Baltimore traded him away).  He is due a MASSIVE pay day, so the true costs of this trade need to include that figure.  deGrom is owed roughly three and a half million dollars for the rest of 2018, BUT he is not an unrestricted free agent until the 2021 season.  Basically, deGrom has two additional years of team control (arbitration eligible), which is HUGE!  (not like the annoying Kia dealer says it)
With all of that said and knowing what the Dodgers just gave up for Machado, how much is deGrom really worth?
Is there a team out there willing to meet the justifiable "monster" price?
Posted by Mike Freire at 12:00 PM

With that valuation of near equal annual value you have to at minimum triple the value in return considering the controllable years. So either 15 prospects of similar value (rediculous), or more likely closer to around five with triple the value each. Think two TOP twenty MLB Prospects Two Top 20-100, and one Top 100-200 level. Teams should want to suffer this pain to garner what is the best pitcher in baseball because you cannot sign pitchers like this anymore. The Mets however are likely the ones less inclined to do so because they are hesitant to admit their aim at team development for several years is now failing.

I'm back to an extended contract through his 35th birthday year. No more than that.

I'm going to re-build this team around him and Syndergaard.

Rebuilding the team around deGrom and Syndergaard is going to be expensive.

Another outfielder will be needed given that Bruce can only be considered a flop and Cespedes and Lagares have to be considered as DL residents for too much of the year to be counted on.
A new 1st baseman would be needed as Alonso can not be counted on as a sure thing.
An impactful 2nd or 3rd baseman will be seeded given that Frazier, like Bruce has to be considered a flop. Sure there are McNeil and Flores, but you can not count on both being impactful players.
A new catcher is needed.
At least 1 new starting pitcher is needed depending on if Wheeler and/or Matz are traded.
A new closer will be needed to go along with probably 2 or more other impactful relievers.

To do all of this plus eat salary on all of the disappointments will cost a lot of $$$.

or the equivalent to what chris sale got traded for A top 5 prospect, a top 40 prospect and some more. same applied to Thor.