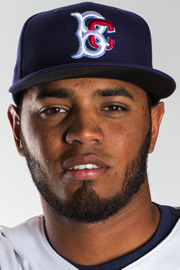 A pitcher's notable level of success in the lower minors is so often not a reliable indicator of future major league stardom, or even, arrival.

The road is long and tough.  Let's recount a few:

PJ Conlon was brilliant up to high A ball, solid in AA, but running into significant headwinds at AAA and in the big leagues, as was Rafael Montero.

Tom Szapucki and Jordan Humphreys were flying high until Tommy John surgery was required in mid-2017. Presumably, we will see then back on the mound in April 2019.

Marcos Molina and Luis Mateo spun off a brilliant campaigns in Brooklyn, needed TJS the next season, and failed to recapture their former pitching mojo once they returned.

On the other hand, Merandy Gonzalez did great in A ball last year, and was traded to the Marlins for AJ Ramos, remember him???   Gonzalez has logged 17 big league innings this year.

So, as Roger Daltrey just asked me, WHO'S NEXT?


JAISON VILERA, THE PRIDE OF CARACAS, VZ, THAT'S WHO!

Vilera's picture, to me, reminds me a lot of former NJ Nets tough guy Kenyon Martin (pictured below).  Tough is good.

Vilera has been sensational in his minor league career so far:

Yeah, but that's just the lowly DSL, my Aunt Millie could pitch well there, and she's 85.  Can he pitch in Les Stats Unis d'Amerique, these here United States of America, in REAL pro ball? You bet.

This year, he skips a level to Brooklyn.  Tough, right?  Yeah, for the opposing hitters, but a breeze for Vilera.

Hey, if he is that good, promote him to Columbia.  Today is fine.

If Jaison is that good, move him along FAST.  Hopefully almost "Gooden-fast".

It is to be expected for a Mets fan to grasp at negatives - you know the feeling, like when your golden haired star pitcher gets hoof and mouth disease and your star OF has more mineral deposit on his ankles than you might find in the Dead Sea - yep, there sure are enough reasons for negativity floating around - and when Peter Alonso was mired in quite a slump, with some Facebook fans getting negative on him.  Stuff like "He's another bum."  To which I reply, "Not so, grasshopper."

Alonso has been reviving since his titanic Futures Game home run passed through some overhead chem trails.  And Pete is still hitting .275 in AA and AAA despite the fairly long slump, with a terrific 83 RBIs in 95 games. Highest in all minor league ball, no minor achievement.

All he needs (very soon) is a long term lease on some real estate about 60 feet to the side of the Mets pitchers' mound in Citifield - you know, first base.

I'll draw up the lease papers and get them notarized, Peter.
Posted by Tom Brennan at 8:00 AM

Word I'm getting is that Vilera could be moved to Columbia as early as... today.

We need some good fortune...
as what happened with Omar we nee some jems to spring forward after Omar departed (Degrom, Familia to name a few stars that were not heralded)

Word is that Omar has taken over the primary duties of scouting the Latin American countries to find additional players he can sign with the moeny the Mets secured in the Familia trade.

These would be for players above and beyond the prospect list generated by MLB.

In the past, he was always good at finding a gem or two for basically nothing.

Nice - and someone did a great job, apparently, selecting Vilera.

Just tell him to avoid children, as I hear that contagious hand, foot, and mouth disease is a real risk to individuals with the rare M chromosome (Mets).

Also, do everything possible to protect the hamate bone, another area of Mets' weakness.

I like how "angry" he looks......I prefer that my pitchers have a bit of a nasty streak. Crowd the plate? Here's a little chin music! Admire a home rum a bit too long, take a seat on the ground during your next at bat. Your guy hits our star player, I take down one of yours!

You get the gist......he looks the part and he seems to be talented (fingers crossed he stays injury free).

I still have hope for The Pounder......Dom Smith, not so much.

Mike, I have my reservations until a pitcher starts showing me quality outings above rookie ball, and I'd like, for that reason, to get Vilera to Columbia ASAP. 2019 is not soon enough.

I think the Pounder will be great - consider that Alonso has half, or less than half, of the MILB plate appearances of Rosario and Smith. Leads all minor leaguers in RBIs, and if you did not see the extraordinary Futures Game homer Pete hit, you need to google it. Think Mark McGuire. Think Dave Kingman.

Pete's come a long way in a short time, and had he not had TWO broken hands since signing in 2016, causing him to miss 60-80 games, he'd already be up here.

Bringing Pete up would start his clock Tom....can't do that.