Fireflies and GreenJackets Suspended In Fifth Due To Rain 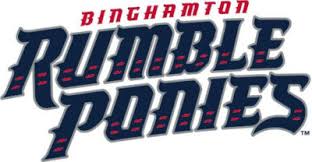 
ALTOONA, PA – Binghamton infielders Andres Gimenez and Will Toffey combined for four hits, but the Rumble Ponies could not overcome stranding 13 runners in a 4-3 defeat to the Altoona Curve on Sunday afternoon at Peoples Natural Gas Field. Franklyn Kilome struck out five over seven innings, but took the loss in his Mets organizational debut.

Despite getting seven runners aboard against Curve starter Luis Escobar, the Rumble Ponies were limited to one run over the first four innings. Binghamton loaded the bases with no outs in the third, but could only scratch across one tally on Toffey’s infield single.

Binghamton’s frustration continued against Altoona’s bullpen. The Ponies put two aboard against Logan Sendelbach in the fifth, but were turned aside as Joey Terdoslavich was nabbed at home on a grounder to first. In the seventh, southpaw Sean Keselica filled the bases without allowing a hit, but escaped the inning unscathed.
On the mound for Binghamton, Kilome pushed past Altoona’s game-opening tally in the first inning and fell into a strong groove. Making his first start with the Ponies after being acquired from the Phillies, he retired 11 straight Curve hitters, pushing into the fifth inning.

Altoona broke the tie game with a three-run sixth inning. With two aboard, Bryan Reynolds stroked an RBI single to right. The Curve added to the lead on a sacrifice fly by Will Craig and an error by Kilome.

Binghamton pushed late, but fell one run short. Gimenez poked a two-run double down the left-field line in the eighth to cut the deficit down. Toffey doubled with one out in the ninth against Tate Scioneaux, but was left aboard as the Ponies dropped the finale.
Kilome (0-1) allowed four runs (three earned) on six hits over seven innings. He walked one and struck out five in his Rumble Ponies debut.

POSTGAME NOTES: Andres Gimenez went 8-for-16 in four games against the Curve…the Ponies are winless in their last five series finales…the Rumble Ponies went 2-5 on their week-long road trip to Bowie and Altoona
Posted by Mack Ade at 7:57 AM