Wilmer Flores, SS: The thinking was that the teenaged Flores would be more than up to the task of playing full-season ball. He wasn't terrible, but he didn't take the South Atlantic Legaue by storm as a 17-year-old, either. The shortstop hit .264 over his 488 at-bats with an OPS of .637. - mlb

Life had beaten Wally Backman down, but he wasn’t quite ready to quit. For me, it was a hard thing to see, to see the changes in the man, what life had wrought. From that December of 2005, I found myself snapping back to 1984, when I first met Backman. I was a 19-year-old, wet-behind-the-ears would-be sports writer, just months from my first job at a daily newspaper. Writing for a publication with the lofty name of Suburban Trends, I was sent out to Shea Stadium to write about this other kid playing second base for the Mets -- for one reason and one reason only -- he was living in a campground in one of the towns we covered, my hometown of West Milford, N.J. - Mike McGann 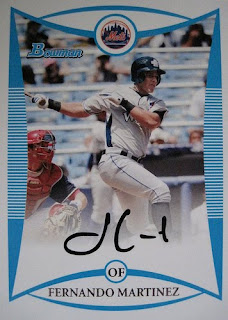 Martinez still is a baby; he hardly is done. He turned 21 five days after the big league season ended, and he doesn't have 200 Triple A at-bats yet. In fact, he has merely 1,184 at-bats in his professional career, and 91 came after he was brought -- read rushed -- to the big leagues last season. If not for injuries to the players on the Mets' roster, Martinez would have played the entire Triple-A season before a September callup.

Compare his experience to what Jose Reyes (1,262 at-bats in the Minor Leagues) and David Wright (1,419) had before they were promoted to the big leagues. All that said, there was no law prohibiting Martinez from performing better during his first big league tour. He didn't distinguish himself. But how many 20-year-olds do? - Marty Nobel

By the way I agree with this from Mack’s Mets to make John Maine the 8th inning set up man to Frankie Rodz and I would also make Ollie P a reliever as well and have Bobby Parnell and Perpetual Pedro Feliciano as my 7th inning mix and match set and throw Sean Green in for shits and giggles. - Kranepool Society

The Nationals named Davey Johnson as the senior advisor to general manager Mike Rizzo on Wednesday afternoon. This is Johnson's second tenure with the Nationals. In 2006, he was an advisor for former general manager Jim Bowden. That year, in fact, it was Johnson who told the Nationals to select catcher Jesus Flores in the 2006 Rule 5 Draft. Washington listened to Johnson, and Flores is now the starting catcher for the team. "Davey makes me a smarter general manager," Rizzo said. "He is a deep thinker. He has done every aspect you can do in the game. Just to be around him, it makes me all that much better." Johnson will attend Spring Training as a coach, and he will most likely be a scout and roving instructor during the season.-
USA Baseball

Stoner isn't on the radar just yet, but he made 47 starts across three levels in 2008 and 2009 and had good numbers (3.59 ERA, 1.201 WHIP) to show for it. (Yes, he went 14-20 during that time, but if you're reading this blog than you already know not to measure pitchers strictly by their won-loss record.) Stoner's cameo in the Mets bullpen last September is not, as far as I know, a portent of things to come. He should be back in Buffalo next season, where another strong performance will surely gain Stoner a lot more attention. - Jack Flynn

As Turkey Week begins, we celebrate the great Mets turkeys of all time. Those who promised greatness and gave us nothing. Generation K: I think it was best put by a friend of mine (whose brain I picked for this article) who said "Pulsipher, Isringhuasen and The Other Guy." Yep, these three pitchers were going to dominate the 1990s. Izzy had a decent career somewhere else, Pulse was a mess, and you're still trying to remember the other guy's name. At least Generation K weren't saddled by horrible black uniforms for this picture. - Mets Police
Posted by Mack Ade at 12:16 AM