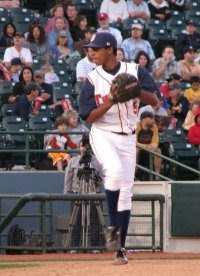 Hilliard was a unanimous choice as the first team all-Region 23 starting left-handed pitcher after posting an 11-2 record with six complete games and a 4.41 earned run average for the nationally-ranked Itawamba C.C. Indians.
Hilliard was a 38th round draft pick by the Mets in 2008. He signed, and was assigned to the GCL mets, where he went 1-0, 2.87, 1.28, in ten relief appearances. This included 17 strikeouts in 15.2-IP, and only two walks.

From http://goresports.wordpress.com: - Itawamba Community College’s Chris Hilliard was drafted late this (Friday) afternoon by the New York Mets in the 38th round in day two of the annual Major League Baseball Draft. The former North Pontotoc High School star was a unanimous choice as the first team all-Region 23 starting left-handed pitcher after posting an 11-2 record with six complete games and a 4.41 earned run average for the nationally-ranked Indians. “I really wasn’t that surprised with the Mets picking me,” said Hilliard, whose 11 wins led the MACJC (15 schools). “They really showed me the most attention of any of the teams.” Hilliard added that he had an extended conversation with a New York Mets scout after his impressive win over Pearl River CC at the regional in Poplarville when the Ecru native went eight plus innings, struck out a season-high 13 batters, gave up just three runs, two were earned, on five hits in a 6-3 victory against the host Wildcats. ICC head coach Rick Collier knew his stellar southpaw would get the call today. “Chris is too good of a pitcher not to be picked in the draft,” said Collier, who often said this year that he had wished Hilliard would have gone straight to his program from high school instead of pitching in less than 10 innings during his freshman season at Meridian Community College. “He throws three different pitches for strikes and that’s a key to Chris’ success.”