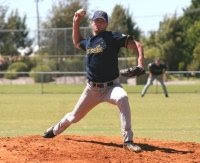 I talked with Shaun Tabrett the other day.

Tabrett is an Aussie prospect the Mets signed what seems to be about 145 years ago, when he was 17. Actually, he’s now turning 21 and should finally make it stateside.

Shaun Tabrett, RHP: Although most Australians are quintessentially fit, that doesn’t alienate them from injuries. The 6-4 slender built righty experienced some tendinitis as a 16 year old, but that setback may have been somewhat of a blessing in disguise considering he didn’t even have to turn to surgery to resolve the problem. While rehabbing his sore arm which had caused him to miss a slew of tournaments he’d been selected to play in, including an Australian Schoolboys team to tour South Africa and an Australian U19 team to play in Taiwan. During this time he regained his velocity from a year ago. Fellow Mets farmhand Deolis Guerra who pitched the entire season in A Hagerstown last year proved that at that age it’s only normal for pitchers to gain about 5 mph on their fastball. Tabrett has a list of good qualities such as an able body, indispensable makeup, no reluctance to go after hitters and last but not least a maturity level evident by his rehab. He’s armed with a solid curveball, changeup, and a high 80’s fastball that won't be viewed by fans until 2008 when Tabrett is projected to play in the U.S..

Mack: So, what are you doing in the off-season?

Shaun: G'day Mack. I am currently still rehabbing from a Slap tear that I had repaired few months ago. 1st of December I meet with the surgeon and fingers crossed I can begin playing catch again. Should be pitching April/May if things go smoothly.

Mack: What was your analysis of your 2009 season?

Shaun: Ha ha. I would like to think of 2009 as a year that I matured and got stronger both mentally and physically.

Mack: What are your hopes and desires for the 2010 season?

Shaun: 2010 is going to be a big year for me. Hopefully I can remain healthy and play a full season as I will be 22. Time is against me and I am no longer a 17 year old signee. . I have worked extremely hard the last year in the weight room especially the last time I was in the promise land. I was a skinny 175 pound kid, I am now sitting at 210 pounds and have never felt better.

Mack: Lastly, anything you want to share with your fans out therin Met-land?

Shaun: Hopefully the ghost of me playing one day will come out of the closet :). Hang in there guys. Thanks Mack and take care of yourself, mate.
Posted by Mack Ade at 12:19 PM