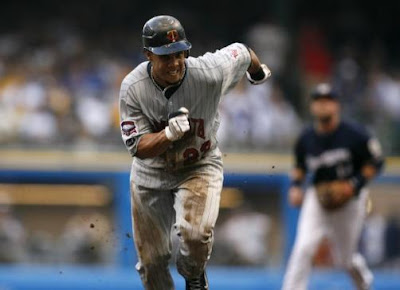 Carlos Gomez:
Escogido (15-9) - Carlos Gomez was the player that was part of a trade for J.J. Hardy. He made his season debut this week getting two hits in three at bats. He was also caught stealing once
http://myworldofbaseball.com/wordpress/?m=200911

Alex Cora:
Yes, he’s “gritty.” Yes, he’s a “winner.” Yes, he has a beard. That doesn’t mean he’s good at baseball, and it doesn’t mean he should be on the Mets next year. This team has serious issues that go far beyond facial hair and scraptitude. There is a lack of talent on the team. Reyes is coming off an injury with an unknown prognosis. Castillo is still an injury timebomb and has deplorable range. It’s completely unacceptable to have the back-up to both middle infield positions be somebody as bad as Cora. Cora is terrible at shortstop, and at this point of his career is likely subpar at second. He’s terrible offensively, and is an injury risk himself. When people use the excuse “he can’t play every day,” then he shouldn’t be on a team that has injury risks and depth issues
http://firejerrymanuel.wordpress.com

Matt Holliday
Angels general manager Tony Reagins said Monday that he's not currently pursuing free agent outfielder Matt Holliday. "He's a talented player," Reagins said of the 29-year-old Holliday. "But our focus is not on him right now." The Angels are hoping to attract John Lackey and Chone Figgins back to Anaheim and will attempt to re-sign both before trying for a big-money free agent bat. As of this moment, Holliday's openly interested suitors are the Red Sox, Mets and Cardinals.
Source: Los Angeles Times

Billy Martin:
Billy Martin was the most fearless manager in baseball history. In 20 years of managing, he never backed down from a challenge. As has been well documented by others, Martin consistently caused dramatic improvements to his squads immediately upon arrival by pushing them hard. The A’s went from losing 108 games to fighting for .500. The Rangers, who had posted back-to-back seasons in which they had played .350 ball, suddenly won half their games when Martin arrived. The Twins and Tigers improved by 18 and 12 games for him respectively. The Yankees won their first pennant in a dozen years under him. The Birnbaum Database gives him high scores for every stop along the way: +64 runs in Minnesota, +199 runs in Detroit, +91 runs in Texas, +142 runs with Oakland, and +219 runs in his various New York stops.
http://www.hardballtimes.com/main/article/book-excerpt-evaluating-baseballs-managers-billy-martin

Omir Santos:
2009 Production: The Mets turned to Omir Santos and Brian Schneider for most of the catching during the 2009 season. Santos surprised people batting .261 with 7 home runs, 40 RBIs and played stellar defense throwing out 30% of runners trying to steal. Santos also provided ma ny clutch hits including a 2-run, game winning, homerun against Jonathan Papelbon in May.
2010 Prospects: The Mets will likely bring back Santos as at least a back up catcher in 2010. Santos is only making the veteran minimum and will be a cheap option for the Mets
http://www.metsfansforever.com

Joel Pineiro
Adam Rubin of the New York Daily News confirms that the Mets are intrigued by free agent right-hander Joel Pineiro. SI.com's Jon Heyman first suggested the connection last week but noted that Pineiro's current asking price (thought to be around three years, $30 million) might be a bit high for the Mets. The 31-year-old Type B free agent went 15-12 this season with a 3.49 ERA, 1.14 WHIP and MLB-leading 60.2 GB% in 32 starts. His 1.14 BB/9 was a four-year low in Major League Baseball.
Source: New York Daily News

Jeff Kaplan:
"high 80's fastball but does not back it up with strong secondary pitches, slurvy mid-70's breaking ball with little depth and a straight 79-81 charge" – www.scout.com

Curtis Granderson:
Granderson’s batting average was dragged down by a .276 batting average on balls in play. That is a number that should typically be in the .320ish range, especially for someone with Granderson’s speed. A shift like that would lead people to think he was largely unlucky. A closer look would show a shift in his balls in play from the harder to field grounders to the easier to field fly balls. Ask fans what they saw and many would say it looked like Granderson got overly concerned with the homers (a new career high) and that he pulled the ball to much. But what would the data say?
http://www.detroittigersweblog.com/2009/11/playing-in-the-spray-curtis-granderson
Posted by Mack Ade at 11:22 AM