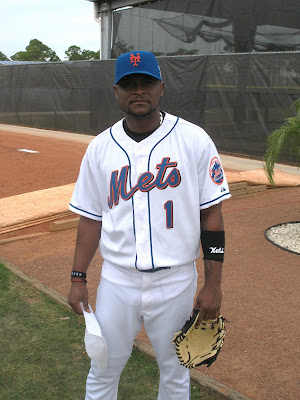 Castillo has 2 years and $12 million remaining on his contract. He plays second base, a position where offense is not particularly relied on, and will enter his age 34 season. At this point in his career, all Castillo has going for him is his plate discipline and an ability to hit for an average hovering in the .280-.300 range. He's not adept defensively according to UZR. If I had to select Castillo or Chris Getz to be my second baseman next year, I'd select Getz. (All else NOT equal.) My point here is that Castillo and his production -- with his contract heavily factored in -- is rather replaceable. The only thing Luis has going for him at the moment is that his bad contract can be swapped for another bad contract. (Give me Milton Bradley any day of the week over Castillo, Carl Everett attitude be damned.)Millwood will be 35 and can hit 200 innings pitched a season. He's a solid, if erratic pitcher who will keep a team in the game and will make $12 million in the final year of his contract. He is best used as a No. 3-4, although the Rangers currently cast him as their ace. Millwood is not replaceable. While you might be able to get away with calling up a AAAA player and having him perform to or over Castillo's abilities, you can't say the same of an AAAA pitcher with respect to Millwood.
That's where this trade breaks down. A Bradley for Millwood swap makes more sense talent-wise, but Castillo being considered on the level of these two players is fallacy at its finest. If true that Mets GM Omar Minaya overvalues him -- even when trying to trade him -- then you can bet on Castillo being the Mets' second baseman in 2010.
http://www.hardballtimes.com/main/blog_article/kevin-millwood-or-luis-castillo-who-is-more-valuable

My sources: - Lackey’s the firs signee. – 3 year deal, around 15/17/18, with a Mets opti0n in the last year. The economy comes into the pay from the get go.
www.there’s no way you’re getting my source out of me.com:

Forget about Matt Holliday or Jason Bay, because any right-handed power hitter who expects to have another free agency in his future would have to be nuts to sign with the Mets for three or four years and then have to explain to his next potential employers why his numbers took such a sharp nosedive.

After those four, that is it for premium free agents this winter. And really, anyone who signs with the Mets at this point is doing it strictly for the dough. Flushing is not a hot destination for anyone these days. There's not a player in baseball saying to himself or his agent, "I gotta sign with the Mets so I can finally get a ring.''
http://networkedblogs.com/p18446837

Of course there were a lot of no-brainers. Cleveland's heir apparent to Victor Martinez's vacated spot, Carlos Santana, was a Futures Game participant and the Eastern League Most Valuable Player in his first full season with the Indians. The lynchpin (if perhaps forgotten) part of the Twins' package they got in return for Johan Santana, Deolis Guerra, also earned a spot despite an inconsistent season. The Pirates made sure to protect several of their top prospects, including right-hander Brad Lincoln and outfielders Jose Tabata and Gorkys Hernandez, the last of whom came over this season in the Nate McLouth deal.
http://mlb.mlb.com/news/article.jsp?ymd=20091120&content_id=7695950&vkey=news_mlb&fext=.jsp&c_id=mlb

Mets: You know they have money, and they also fit the model in terms of the type of team that would value what Bay brings to the table. It has been well-documented that Bay’s detractors point to defensive metrics that don’t paint a pretty picture. (Although Bay’s agent, Joe Urbon, not only pointed out the flip-side to that argument when talking to WEEI.com, but said just a few days ago that no team he had talked to has brought up concerns regarding any of the outfielder’s defensive deficiencies.) So why does that concern the perception we might have in regards to the Mets’ interest in Bay? Check out this quote from New York GM Omar Minaya at the general managers meetings last week: “Defense is important because it’s a pretty big ballpark. But the bottom line is that if you’re a corner outfielder you’ve got tave slug,” Minaya said. “I would put offense over defense right now in a corner outfielder.” Interesting
http://mlb.mlb.com/news/article.jsp?ymd=20091120&content_id=7697228&vkey=news_nym&fext=.jsp&c_id=nym&partnerId=rss_nym
Jason Bay played for the Mets in 2002, for Binghamton (.290/383/.477/.860) and St.Lucie (.272/.363/.437/.800). On July 31, 2002, the Mets traded Josh Reynolds, Jason Bay and Bobby Jones to the San Diego Padres. Received Jason Middlebrook and Steve Reed

The franchise never has won a Most Valuable Player Award, and no Met has come closer than Seaver did in 1969 -- 22 points. Moreover, the Mets have won four Cy Young Awards, three by Seaver, and four Rookie of the Year Awards, three by pitchers, since their inception in 1962. And the only player wearing a Mets cap in Cooperstown is (Tom) Seaver. Given their history, it might have been more appropriate for Citi Field to have been built on a bump.

According to Jerry Crasnick of ESPN.com, the Marlins and Josh Johnson have been unable to reach a contract extension, that could force the Marlins deal him before he becomes a free agent in 2011. Obviously, Johnson will not be cheap being the Marlins best pitcher, but could be cheaper than offering a contract to John Lackey. Personally, I would trade Fernando Martinez, Wilmer Flores, or Brad Holt for Johnson, along with prospects. As I’ve stated before, I would rather take the proven guy over the prospect any day. And did I mention the Mets desperately need a number two starter behind Santana.
http://networkedblogs.com/p18513615

The Red Sox claimed pitcher Robert Manuel off of waivers from the Mariners, according to a team press release. The 26-year-old righty made his MLB debut with the Reds this year, recording 13 outs without allowing an earned run. His Triple A numbers were good, too; Manuel had a 49K/16BB ratio and an overall 2.88 ERA for the Reds and Mariners.
http://www.mlbtraderumors.com

The Cubs continue trying to find ways to move Milton Bradley in packages that would bring them second baseman Luis Castillo from the Mets. The latest, according to sources, is a three-team deal with the Rangers that would send send the Rangers' No. 1 starter, Kevin Millwood, to New York.

A source with the Cubs believes this proposition has legs, saying, "there's a deal to be made there.'' But the Rangers haven't committed to the return of Bradley, who played in Texas before signing with the Cubs, and would need the Cubs and maybe the Mets to kick in money to pay most of the $21 million remaining on Bradley's contract before doing any deal.

Texas believes it has enough pitching depth to move Millwood, who is due to earn $12 million in the last year of his contract. The Mets are searching for pitching.
http://www.chicagobreakingsports.com/2009/11/cubs-explore-bradley-deal-that-would-net-castillo.html