Two months before they started limbering up in St. Petersburg and nearly four months before they began losing in earnest, the New York Mets made their debut at the Macy's Thanksgiving Day Parade on November 23, 1961. There had only been actual Mets for about six weeks, since the expansion draft yielded 22 players of varying talents and primes who were slated to comprise the bulk of the Original Mets. Their real star, of course, was their manager. One year removed from not quite winning an eighth World Series in a dozen seasons for a particularly demanding employer, Casey Stengel had signed on to pilot the expansion Mets. Casey Stengel had been, was and would always be the personification of baseball in New York. He was a Dodger under Wilbert Robinson, a Giant under John McGraw, a Yankee who lorded it over the American League and now the best thing the nascent Mets had going for them.- yardbarker 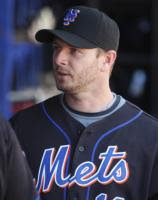 Wagner was a little wild but otherwise dominant in coming back from Tommy John surgery. Despite the lost year, he's arguably the best reliever on the market, given his end-year performance and the fact that the other guys all have spotty health records. The Red Sox did him a favor by not picking up his $8 million option, as he'll do better than that on the market, most likely getting a two-year deal. Wagner may have to choose between setting up for a good team or closing for a bad one.

Chan Ho Park: Ignore the overall numbers. As a reliever the past two seasons, Park has 101 strikeouts and 37 unintentional walks in 120⅓ innings. Split the difference on his homers (10 in '08, none in '09) and project him as 70 innings of effective relief in a package that gets both lefties and righties out. He's worth at least a one-year deal, and I'd go to two if necessary. - baseballprospectus

Josh Thole leads the league in hitting at .393. The way he is raking in the Venezuelan League the Mets catching job should be his. There doesn’t appear to be any alternative. He rippled together another 6-game hitting streak, going 9 for 24 for the week and hitting his second homer of the season. His OBA is .504 with a 24/10 walk to K rate and his slugging is .554. He also drove in seven runs during this 6-game hitting streak. He’ll face better pitching in the major leagues, so spring training will be the key - mwob

Now, we give you Daniel Murphy's play that ... that ... behind-the-back thing he did, playing first base during the Mets' July 8 game against the Dodgers at Citi Field. Go on, describe that in 25 words or less. Can't be done, if only because any description has to go heavy on the adjectives and requires an "Are you kidding me?" and a "Holy Ozzie, Batman!" to convey the thought. What was Murphy -- once a third baseman, once a second baseman, never a left fielder and finally a first baseman -- doing making a play that Keith Hernandez, the patron saint of first basemen, wouldn't have attempted? - mlb

Philadelphia Phillies signed 1B Andy Tracy and SS Wilson Valdez. Valdez, a minor league free agent who had notable big league playing time in ’09, signed early and provide quality insurance for the Phillies to stash at Triple-A. Valdez, 31, served a similar role for the Mets in ’09, garnering playing time mostly as the result of being the only ambulatory shortstop in New York after Jose Reyes and Alex Cora went down with injuries. He batted .256/.326/.337 in 86 at-bats. - BA

The Mets could have a sleeper starting pitcher with their pickup of Lance Broadway from the White Sox. He continues to pitch well, giving up only one run in his six inning start last week. He’s only given up two hits in his last 12 innings of work. He leads all pitchers in ERA that have qualified with enough innings pitched with a 2.65 ERA - mwob

The Mets had the first pick in the 1966 amateur draft. Their scouts had focused on a young outfielder attending Arizona State University. The kid had power and speed – he was a sure bet to advance though the system. Yet as the draft drew near, the Mets changed their plans and drafted Steve Chilcott, a catcher out of Lancaster, CA. The supposed reason? The young OFer was black and his girlfriend was white. Chilcott never played a game in the majors. The young OFer is in the Hall of Fame – Reggie Jackson. -
mets police
Posted by Mack Ade at 9:34 AM

The Mets still seem to be adverse to hiring American born black players. I think the last one the Mets hired (who wasn't a bench player) was Cliff Floyd and that was way back in 2003. For some reason Omar doesn't like American black players. Which just boggles my mind since they dominate the all-time homerun list!!!