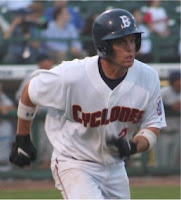 Mets top prospect, 21 year old Fernando Martinez, is back on the field playing for Leones del Escogido of the Dominican Winter League.

On Friday night he played the entire game in left field, going 0 for 4. On Saturday, Fernando was the DH and went 1 for 4 with a single and RBI.

Fernando had surgery in July for a torn meniscus.

He is currently rated by Baseball America as the Mets third best prospect behind pitcher Jenrry Mejia and shortstop Wilmer Flores.

Former Major Leaguer Felix Diaz struck out three over three hitless innings as the Dominican League's Leones shut down the Gigantes. Brewers outfielder Carlos Gomez had two hits and scored a run for Escogido, while Angels prospect Bradley Coon had the lone RBI for Carolina.

At first base, Nick Johnson, Hank Blalock, and Carlos Delgado are options. We know that Baltimore is not the only club keeping tabs on Delgado, as his last employer is said to be keeping an eye on him as well. The 37-year-old slugger ranked #43 on Tim's Top 50 Free Agents list, where it is predicted that he will sign with the Orioles.

A four-step program to right the Mets ship...


1. LOAD UP ON SOUTHPAWS TO TAKE ADVANTAGE OF THE HUGE CITI FIELD OUTFIELD DIMENSIONS.

No doubt about it, right-handed power hitters struggle in Citi Field. Only those who dead-pull are able to clear the fences. Those with opposite field power (like David Wright and Matt Holiday), just hit catchable fly balls. Even Mike Piazza would struggle at Citi. On the other hand, it seems the better place to hit big flies is to right field from the left side of the dish. So, why not load up on lefthanders? Three or four southpaws in the rotation is an absolute must. And the Phillies would be pretty vulnerable to such a rotation. How about Santana, Wolf, Millwood, Niese and Perez? Sorry, the Mets have to give Oliver a chance to redeem himself (not unlike Castillo) and then move him if things go well. Even if they land Doc Halladay (which would likely mean moving Big Pelf and several others), they can still trot out three or four southpaws. This would also work to the advantage of a heavily right-handed bullpen, which the Mets already feature. Give us the lefty starters and stay clear of the Harangs, Arroyos, Pinieros and Marquis.