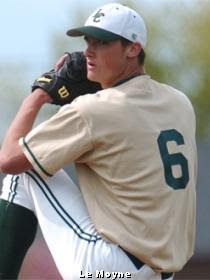 From a local paper before the draft: At 6-foot-5, 195 pounds, the lanky Beaulac looks every inch the part of a Grade A prospect. His hard stuff sizzles up to 94 MPH, and his tabletop-drop slider sends hitters raking through the dirt to find it. He set a school record with 113 strikeouts (in 92 1/3 innings) this season, to go along with a 9-2 record and a 2.83 ERA.

Beaulac entered the Mack’s Prospect List for the first time in August 2008, coming in at # 19: 19. RP Eric Beaulac/K-Port – 21 years old – I’ve been told by a couple of so-called ‘inside sources’ that the Mets are very high on this pitcher. He got his first professional start on 7-15, gave up 1 run in 4.0 IP, then followed it up with 5.0 IP, 1 ER, for his first professional victory on 7-15. Then, on 7-25, he returned to a relief role, pitching 3 scoreless innings and lowering his ERA to 1.89. On 7-29, Beaulac was promoted to A-Savannah and should be used as a starter for the remainder of the season.

In February 2009, Toby Hyde wrote: Beaulac had a nice debut split largely between Kingsport and Savannah, complemented by equally strong scouting reports. Scouts praised both his arm strength, seeing an average to better MLB fastball, and a power breaking ball. 2008: Beaulac set a new Le Moyne Dolphins single-season strikeout record (113) on his way to the 2008 Division I Independent Pitcher of the Year Award. The Mets started Beaulac out in Brooklyn where he made just two relief appearances in June, the second of which was a perfect, five strikeout performance over two innings. That earned him a demotion to Kingsport where he was excellent in three relief appearances before two starts in mid-July. And that prompted the Mets to promote Beaulac to Savannah where he made six strong starts from the end of July to August. One statistical red flag from his Savannah time was the increased walk rate. Projected 2009 Start: A-ball

Listen, you keep your ERA below 3 and have better than a 1.0 K/IP ration, you get promoted. Still wished he got back yo me about that interview, but it’s on to Lucy for Eric.
Posted by Mack Ade at 3:44 PM

Eric Beaulac is truly one of the genuine prospects emerging through the Mets organization. His alma mater, LeMoyne College, produced major league standouts such as Tom Browning of the Cincinnati Reds and Jim DeShaies of the Houston Astros.

LeMoyne's baseball team, the Dolphins, is a perennial Division II powerhouse, from Syracuse, no less.