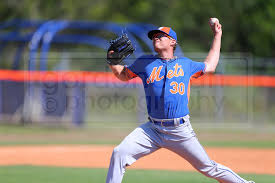 We’re talking this morning with who could possibly be the next Mets closer in Queens someday.

(Mack) – Thanks Dave for joining us here at Mack’s Mets. First question is easy… HOW DO YOU LIKE MY CLEMSON TIGERS (Dave went to college at the University of South Caroline-Upstate)?

(Dave) - Thank you for having me!! As far as Clemson goes, I could say I'm indifferent. Playing at Upstate I never really developed a desire to pull for them or USC. But still, it was awesome for the team and the school to bring home a national championship.

(Mack) – How did a farm boy from the Mohawk River area of New York State wind up in the Up-country of South Carolina?

(Dave) - Well, it all started when i was playing travel ball and we were playing in a tournament in Toms River NJ. The recruiting coordinator of Upstate at the time, Russell Triplet,  played at Clemson. So he knew that Clemson did a lot of recruiting in the North East. And he stumbled upon me at this tournament and a few months later I committed to play at USC Upstate.

(Mack) – Damn… we almost had you…  Josh Thole told me one day when he was sent up from Savannah to St. Lucie… “remember when we used to say each team in the Sally League had two or three quality players? Well, they all are quality players up here.” You experienced a little of that when you went to St. Lucie after being lights out in Savannah. What adjustments did you make?

(Dave) - Well for me it was more mental than physical. When I got called up to St. Lucie, in my debut, I hung a slider to a lefty and roped right of my forehead. Then a week later, I took another laser off my collar bone. And after that I started pitch too fine and nibble. Well, when I reached Binghamton this last season, I changed my mentality and started attack very aggressively down in the strike zone. And had a lot of success doing so.

Reese Kaplan asks - There have been a number of soft tossing lefties who have flourished in the majors, including Mark Buehrle, Ted Lilly, Jamie Moyer and others.  Who have been some of your role models as you progressed through organized baseball?

Richard Herr has two questions – 1. Who in the Mets organization has helped you the most? What did that person do?

(Dave) - Couple names come to mind but the person who had the most influence on my career. Hands down was Glenn Abbott. (AA pitching coach). He had one saying that he would always say the next after an outing. And it went "he swung at that pitch that said he wanted another". I took that at as if the batter is struggling to hit that pitch in a certain zone, why am I going to try and help him and throw something else? Using that it made the game really slow down for me and keep things simple.

(Richard) - 2. What pitch are you working on right now? What are you doing to improve that pitch?

(Dave) - Getting comfort in using my change-up against lefties and using my slider against righties. Those two things I feel will really help me. Right now to get better at that I'm throwing them more in bullpens simulating those situations.

David Rubin has three questions – 1. What was the biggest adjustment you had to make in becoming a reliever after so many years being a starter?

(Dave) - Realizing that it is a sprint not a marathon, so leave nothing in the tank and don't keep pitches in your back pocket. And that you will throw multiple times in a week, so adjust your throwing program to allow you to be fresh night in and night out.

(David) – 2. Do you still get the itch to take the ball every fifth day or have you become fully acclimated to pitching out of the bullpen?

(Dave) - Yes and no. Yes, because you get a chance to fix thing with bullpens and flat ground work. In the bullpen you gotta make adjustments on the fly. No, because if you have a terrible start you gotta sit on it until your next start. And when you’re in the bullpen you’re going to get called back out there the next day or the day after that so you can quickly turn it around.

(David) -3.  Do you think the fact that you have a multi pitch arsenal will help you get to the Bigs faster, where most closers rely on one or two pitches at the most, or have you been advised already to utilize your two best out pitchers more often?

(Dave) - Yes I do. Having a multi-pitch aresnal as a reliver doesn't limit you to one job or one situation. Any good hitter late in ball game is already trying to turn the pitcher into a "one pitch" pitcher while he is in the on-deck circle. If the hitter can do that than his job just became a lot easier. So having that third pitch in high leverage spots is a great weapon to have.

And we’ll end this with three questions from out ‘minor league weanie’ expert, Tom Brennan –

(Tom) - The Mets have had some great lefty relievers, such as Tug McGraw, Jesse Orosco, Billy Wagner, and John Franco.  Who in the Major leagues, past or present, do you believe your pitching repertoire most closely resembles, Dave?

(Dave) – To be honest I haven’t really thought about. That’s a tough question.

(Tom) - How do you feel as you are being brought in to close a game?

(Dave) – I love it. Theres no other feeling like getting the last out and closing the game down.

(Tom) - Las Vegas is most likely your team to start 2017, as you've more than succeeded at AA.  Vegas is noted for its difficulty for pitchers in minimizing runs.  How are you preparing for that challenge?

(Dave) - Focusing more on attacking down in the zone and changing speeds and being aggressive and dictating the feel of the at bat. If I get hit, it will be because I’m up and falling behind guys.

Curious: pitch type-by-pitch type, how would you compare Rosebloom and PJ Conlon?

Let David know that when Las Vegas comes to El Paso I'll try to connect with him. If nothing else, he could use restaurant tips for the area. :)

I may focus a lot on the minors and that makes me a minor leagues weanie, but I am truly a major weanie, no matter what I write about: :)

Looking very much forward to your 2017, Mr. Roseboom. With Conlon and Szapucki floating around, 3 excellent lefties.

Nice interveiw with boomer. Good guy. I have seen him pitch In Binghamton, leftys had no chance against his slider they know its coming and still can,t hit it. I was sitting behind mets players with radar gun charting pitches 89 to 92 was what I saw. But his sliders was allsome.